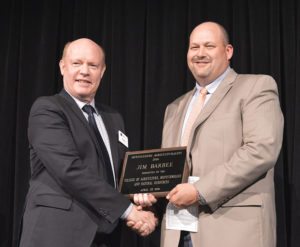 The University of Nevada, Reno College of Agriculture, Biotechnology and Natural Resources (CABNR) named Jim Barbee, Nevada Department of Agriculture (NDA) director, 2016 Outstanding Agriculturist of the Year on April 27. Barbee was honored at CABNR’s annual awards ceremony and reception, along with outstanding students and accomplished faculty and staff.

“It is with great pleasure that we recognize Director Barbee as outstanding agriculturalist of the year. Jim has shown remarkable leadership in the state, which has benefited agricultural producers, manufacturers, and educators,” Bill Payne, dean and director of CABNR, said. “His vision and its implementation have strengthened the agency, increased the health and nutrition of children and served to expand the agency’s ability to promote and protect agriculture in Nevada.”

Barbee has served the agriculture industry his entire career and has led the NDA as director since 2011.

“CABNR is responsible for developing future agriculturists in Nevada, and I am honored to receive this recognition on behalf of the truly dedicated team we have at the NDA,” Barbee said. “We are grateful to be a part of ‘Team Ag,’ working right alongside the university, industry and citizens we serve.”

Initiated in 1967, the Outstanding Agriculturalist Award recognizes individuals who play a significant role in the advancement of agriculture in Nevada. Recent recipients include David Peri, president of Peri & Sons Farms, and Dennis Hellwinkel, executive vice president of the Nevada Farm Bureau.