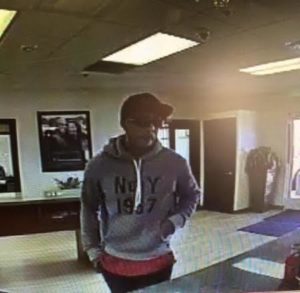 Just after 11 a.m. today he Meadows Bank on South McCarran Boulevard was robbed. The same suspect later walked into a Wells Fargo on South Virginia Street and demanded money from a teller.

Witnesses described the suspect as a black male in is 20s, about 6-feet tall and having a thin build. He was seen wearing a black baseball cap with red lettering, a black jacket and black pants and sunglasses.

He was also seen wearing a grey sweatshirt and a red shirt under the hoodie.

The Reno Police Department is working with the FBI to find the suspect.