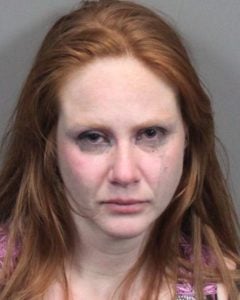 Washoe County Sheriff’s Office (WCSO) detectives yesterday arrested Laura Hesse, 30 of Stead, for charges following an investigation that started after a dead dog was found in a dumpster.

She is being charged with child neglect, animal abuse charges, DUI and possession of a controlled substance, according to WCSO.

“On February 3, 2016, officers with the Reno Police Department located the body of a female Boxer wrapped in a towel inside a dumpster located behind a business on the 13000 block of Stead Boulevard. Washoe County Regional Animal Services was notified,” said the WCSO in a statement. “Animal Services identified Hesse as the owner of the animal. Because the necropsy indicated that the dog’s death was related to multiple stab wounds and blunt force trauma to the head, Animal Services notified the Sheriff’s Office Detective Division to review the case for possible criminal activity.”

An investigation revealed enough evidence to arrest Hesse on charges for killing her dog, allegedly as a means to save on the fees to have the animal euthanized by a veterinarian.

Detectives conducted an operation in Stead yesterday and saw Hesse exiting a residence on Zeolite Drive and entering a vehicle.

“Hesse ran a nearby stop sign and was subsequently stopped by a … deputy,” said the WCSO. “Hesse was found to be driving under the influence and taken into custody. (Officers) observed a small child exit an open door at the Zeolite Drive residence and begin wandering the neighborhood.

“Attempts were made to contact someone within the home with no response. Deputies observed controlled substances within the residence and obtained a search warrant. A search of the house discovered methamphetamine, marijuana and drug paraphernalia.”