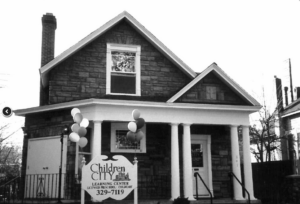 UNR’s efforts were met with opposition, and critics said that the university has not done enough to communicate with citizens and partners. Read the story here.

The Council was also going to consider a resolution supporting President Obama’s executive action on immigration, but the deadline to do so was last week.

A handful of citizens spoke in favor of the resolution. According to a city document,

“on January 19, 2016, the Supreme Court agreed to review a preliminary injunction blocking the nationwide implementation of the President’s executive action on immigration. The executive action provides important humanitarian relief to an estimated four million undocumented immigrants who have been in the country since January 2010 and who have children who are citizens or permanent residents or who came to the United States as children and meet certain educational requirements.”

City Attorney Carl Hall said, however, that “it’s too late to join the amicus brief.” He said the deadline was March 2, 2016.

When asked by Councilwoman Naomi Duerr if the council could take another action on the agenda item, Hall responded, “The agenda should accurately reflect what action you’re going to take, and this doesn’t do it.”

A staff memorandum indicated the deadline to join the brief had passed “but (the Council) would be shown as supportive in the list of participants.” The council may revisit the item at its next meeting. 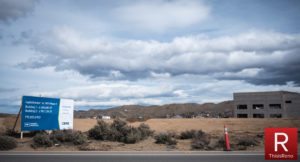 The Reno Planning Commission denied a request by a developer to change its hours of operation and to reduce its required landscaping plans on Dermody Properties’ Logisticenter 395 Project in the North Valleys.

A warehouse on about 131 acres under construction at Military Road and Lemmon Drive was criticized because of noise and traffic issues.

Councilman Paul McKenzie, who lives in that ward, in particular had harsh words about the warehouse project, calling it a nuisance.

Kenneth Krater of KK Consulting, representing the owner,  said that the project is following requirements of its special use permit and appealed the planning commission’s decision.

The council voted unanimously to affirm the planning commission’s decision, however. The council also added a condition for staff to revisit the item in six months and to consider potential noise issues. 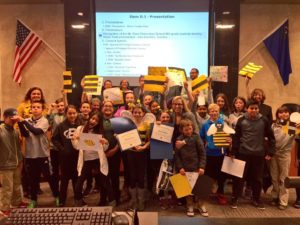 Image courtesy of the City of Reno.


The council recognized the winning group from a previous meeting’s presentations by fifth-grade students at Mt. Rose Elementary School.

The winning group’s project was, “Saving Lives by Saving Bees,” and the students propose to build rooftop gardens with apiaries on tall buildings.

Teacher Ana Sanchez praised the students and said the assignment was a way for students to be educated by addressing real-world problems.

The following highlights are provided by the City of Reno.

Council unanimously approved a request to relocate a State-approved Medical Marijuana Establishment (MME) for a Cultivation Facility and Production Facility registered and permitted under NRS Chapter 453A. Good Chemistry Nevada, LLC will relocate from 415 Parr Circle to a new location at 491 and 495 Eureka Avenue.

Council unanimously approved a request to partner with the World Wildlife Federation (WWF) to participate in Earth Hour 2016 by turning off the lights on the Reno Arch on Saturday, March 19, 2016 from 8:30 to 9:30 p.m.

Council unanimously approved to adopt a Resolution directing the City Attorney to work with a coalition of local governments to join an amicus curiae brief in support of the United States Environmental Protection Agency in defending the Clean Power Plan.

Council unanimously approved an Intergovernmental Agreement with Washoe County for Funding of Phase V Construction at North Valleys Regional Park in the amount of $1,000,000 from Residential Construction Tax Funds District 1. Construction will include two baseball fields and one large flat field, plus additional parking, restrooms, and related improvements.