Article and photos by John Tuckness

Saturday March 19, 2016 local Reno hardcore/metal rockers Fall Silent returned from a thirteen year hiatus to rock the Holland Project in midtown Reno. This was actually the band’s second show since they called it quits in 2003, the first was a secretive show held at The 40 Mile Saloon in Reno last December.

The show at the Holland Project was completely sold out by the day of the show. Around 200 new and long time hardcore fans of the band packed the very small venue, which I thought was too small for this show. The Holland Project is a great venue and has some really good shows there, but for a show like this, with a band that was so popular back in the day, it was just not big enough to me. Also on the bill was another local Reno favorite, Elephant Rifle.

The band played over two hours of their greatest hits. The set list went like this (from the band via e-mail), 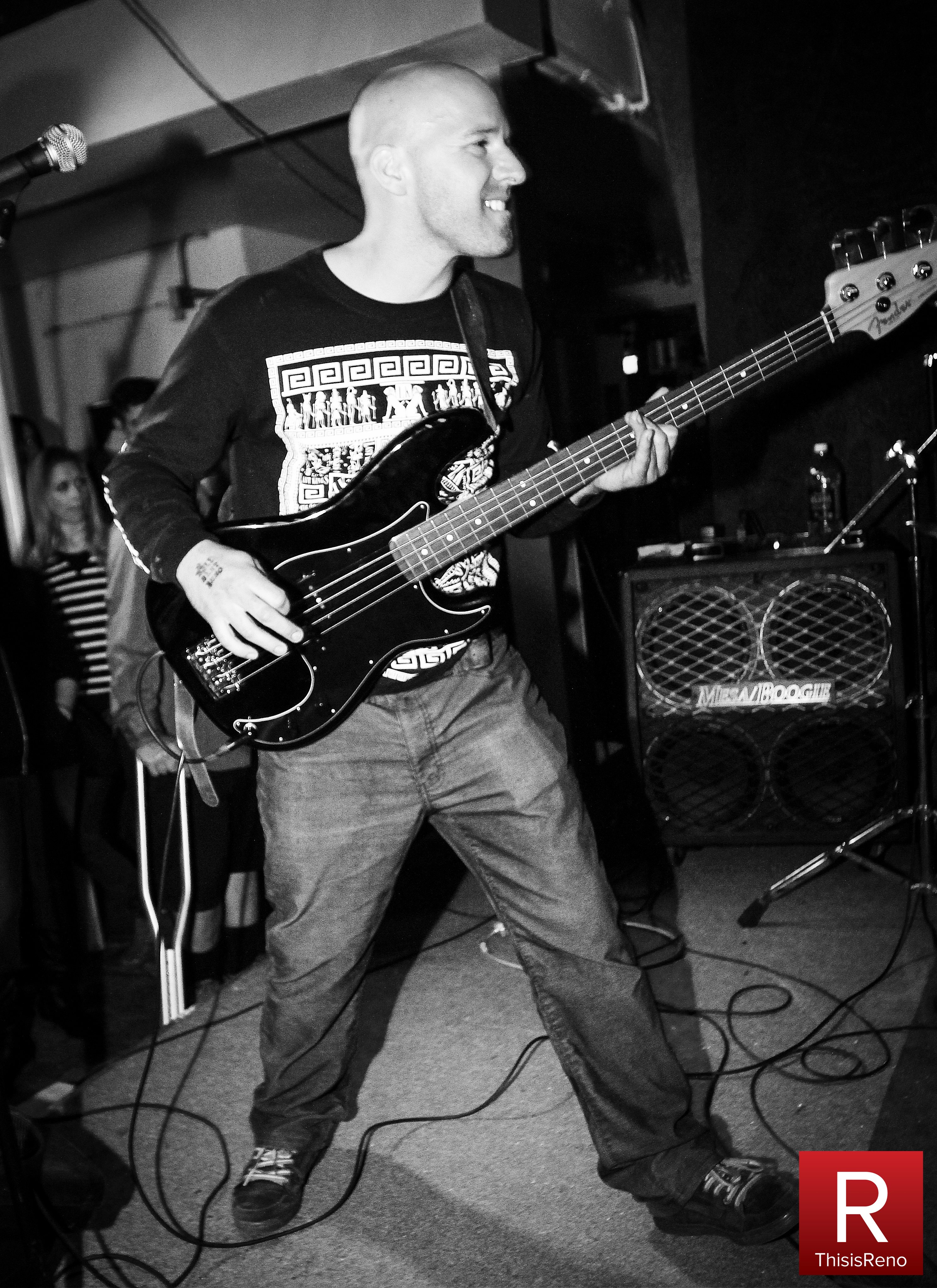 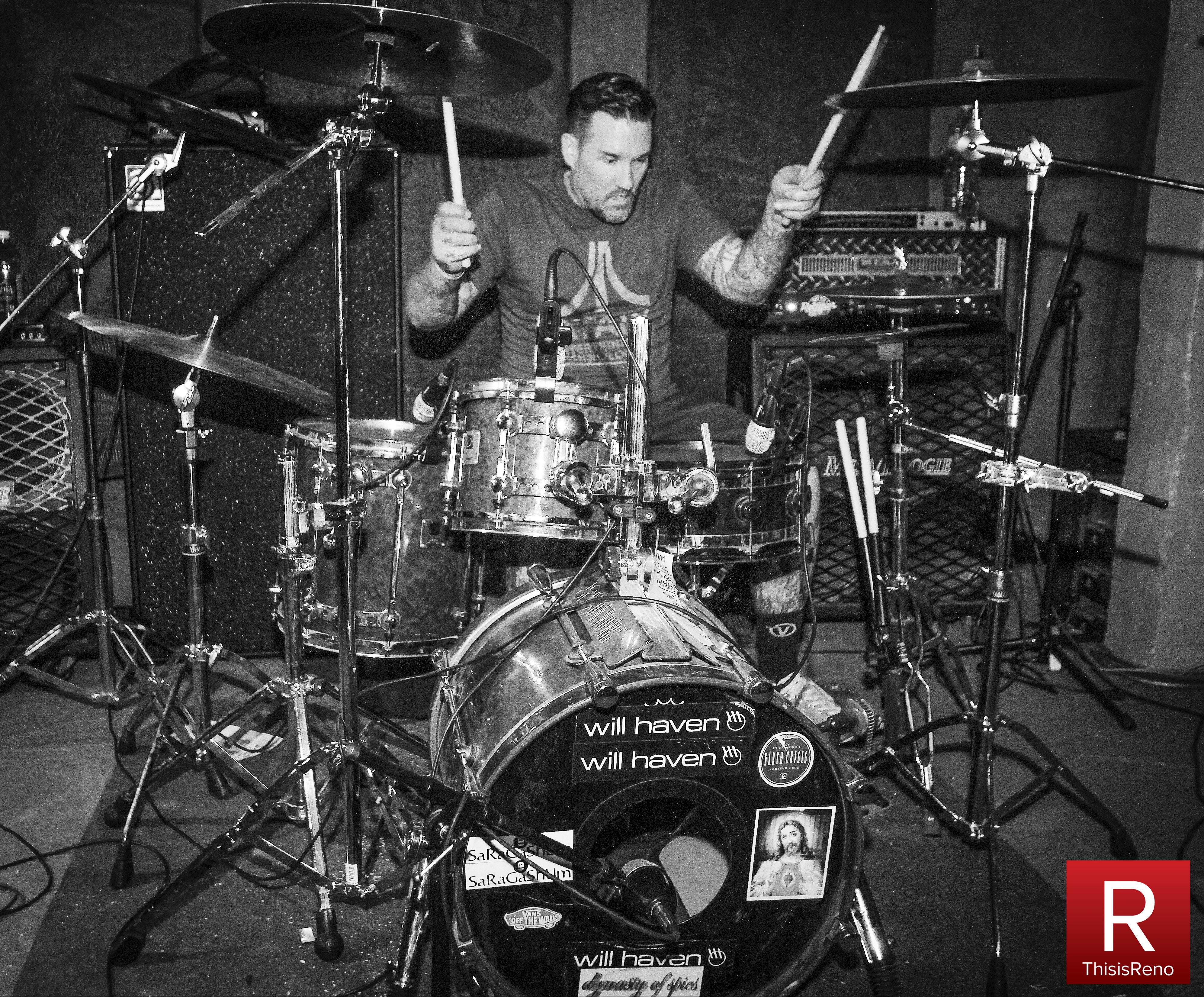 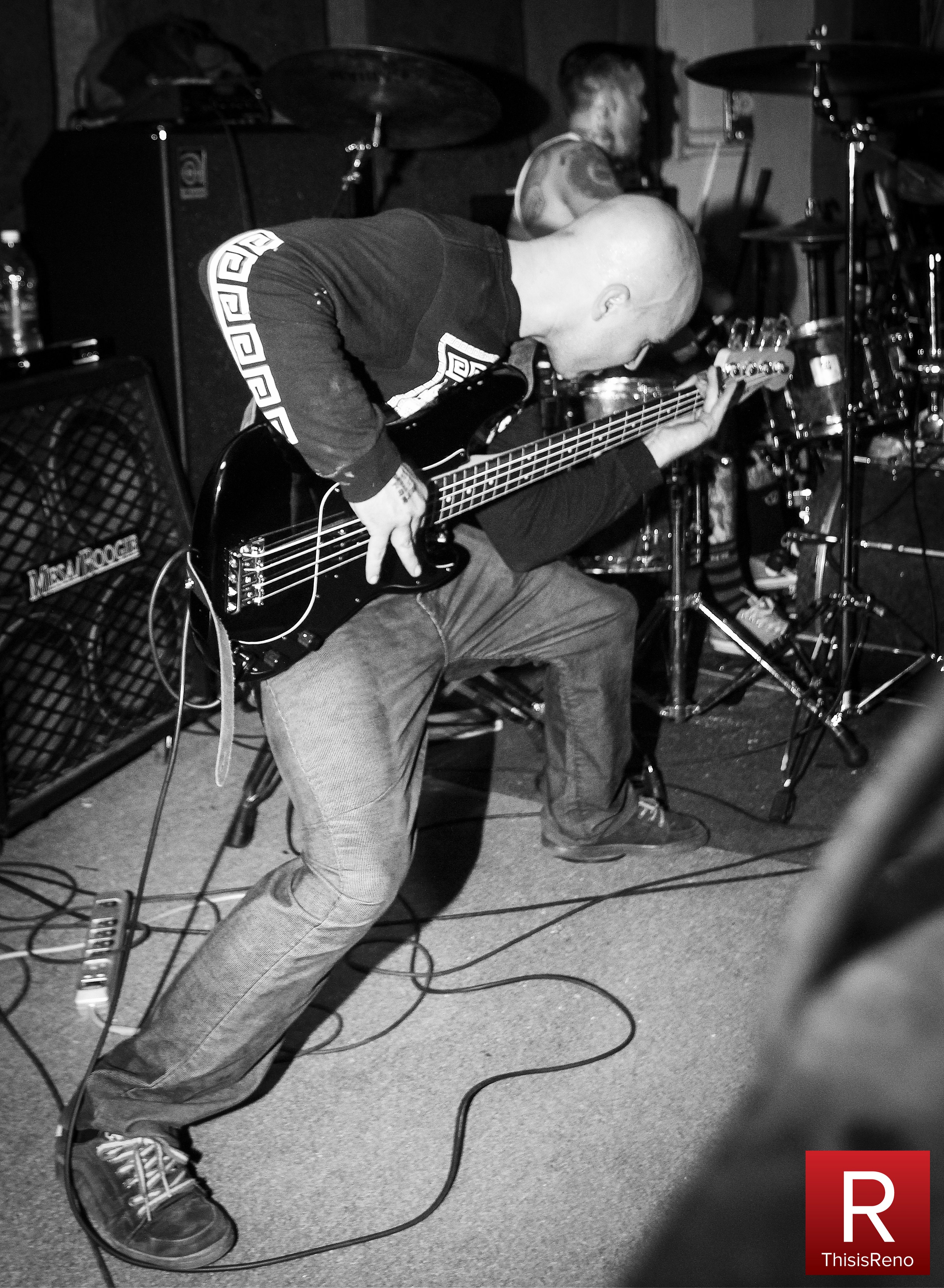 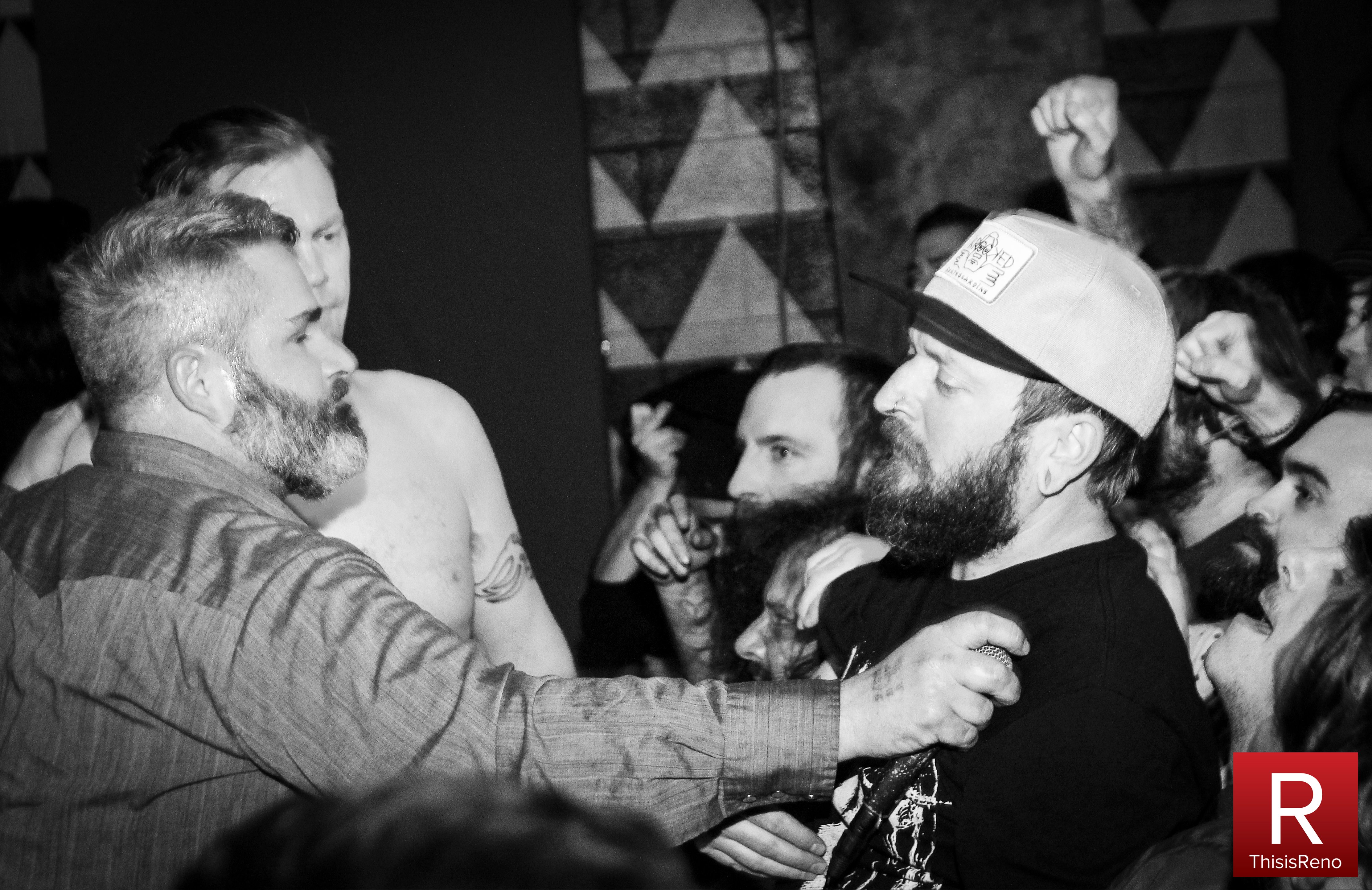 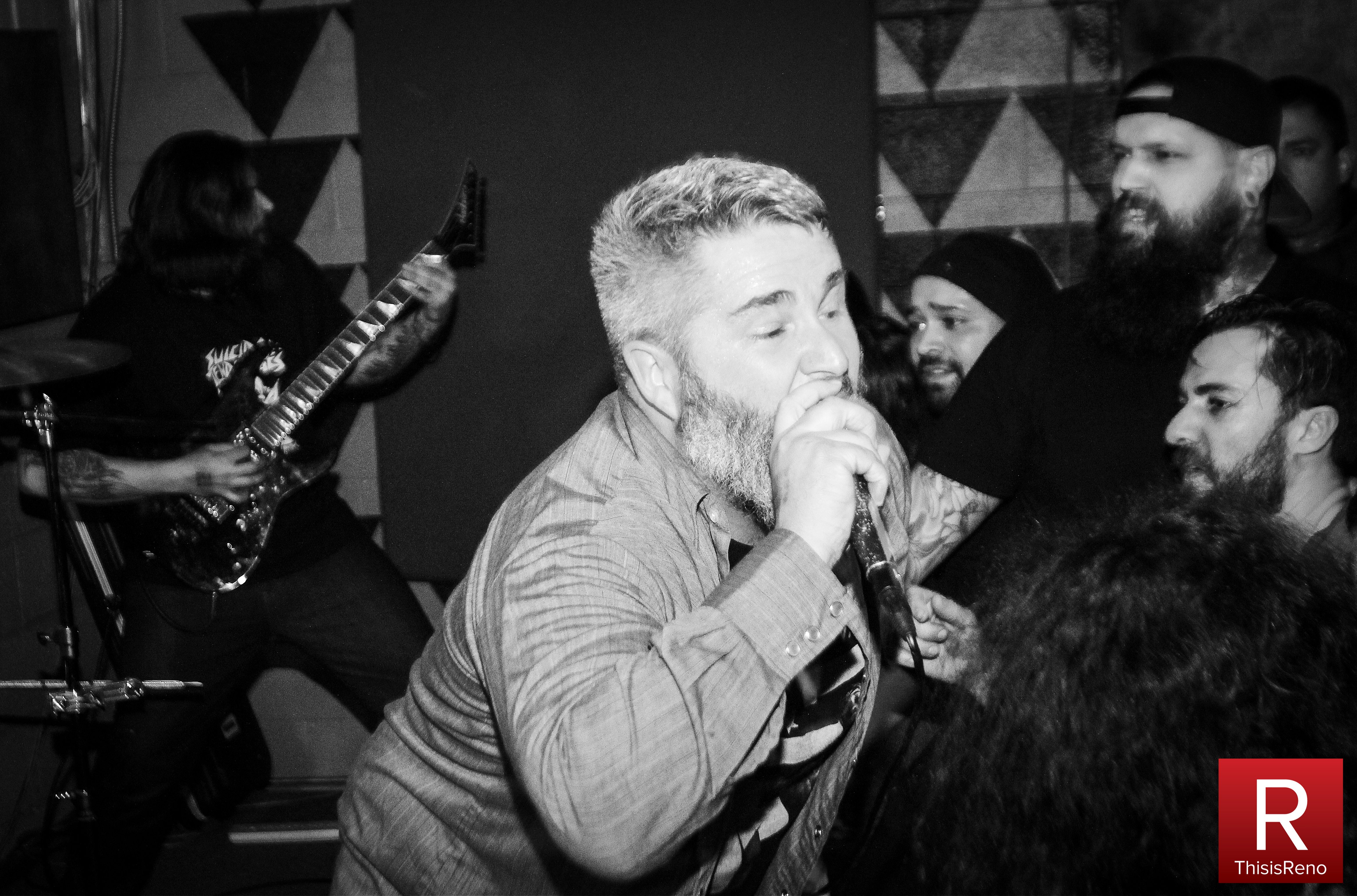 As I arrived at the venue, which was my first show there, I could tell this was going to be a very hardcore show just by the people that were standing around getting ready for the headliner to hit the stage. Mostly everyone there was wearing all their metal gear and looked like they were ready to tear the place apart, but I had no idea what was about to happen.

Not only was I there to do a review of the show, but I was also shooting (photographing) the band’s long awaited return to the music scene as well.

When I went inside, I headed straight to the front of the stage where the band was putting the final touches on their gear and checking the sound, the usual stuff that goes on before the show starts. I talked to the guys for a minute and told them to kill it and blow the roof off the place. I asked Justin Spalin, the band’s bassist if he was nervous and told me, “no, I’m ready.”

So now it’s showtime, the band starts to play, then all at once the entire venue turns into one big mosh pit. I was hit from behind from all directions, and it took everything I had to protect my very expensive camera equipment from being destroyed. The next thing I know, without missing a word, the bands front-man Levi Watson pulls me onto the stage where I realized nothing was broken and headed to the back of the stage and jumped off to safety, all while the band continued to blow the roof off the place without missing a beat.

The pit lasted the whole set, people were jumping on and off the stage doing what moshers do. And the best part, besides me not getting killed, was that to the best of my knowledge, no one got seriously hurt. Just how that is possible, as rough it was, I have no idea. It’s always a good thing when no one gets to badly hurt, although I’ve seen it happen before.

Everyone there, all being big fans of Fall Silent for many years got just what they came for, the return of a great band that seemed to come back without missing a beat after 13 years off the grid.

The next day as I healed my sore muscles from being pummeled the night before, I contacted the band with an e-mail and told them what an awesome comeback show it was. I asked what they thought about the show and they replied, “It was a pretty amazing night and it went just like we planned.”

I then asked when the next gig was going to be and hopefully it would be at a much bigger venue. They said, “We are going to try to write a new record in the next few months, so we will not be playing any shows for a while. We like that the venue was The Holland Project. It is a great place for all ages shows and it is going to outlast any venue in this town because they are doing it for the right reasons; not for profit. If we do play again, we think that PB&J’s would be a pretty good place. That is a long while away though. Just trying to write for now.”

All in all, this turned out to be a very good show for the band, The Holland Project and especially for the fans that waited a very long time for this show to happen. A great time was had by all.

You can check the Holland Project’s web-site or Facebook page for any and all up-coming shows, there’s bound to be a show that you like.

Like I always say, support the local bands and venues. Go to a show.

Interview: The Return of Fall Silent