Video and Text By Nicholas-Martin Kearney

And that is a basic step of the Lindy Hop, a social dance that is seeing resurgence in popularity, especially among a younger generation. 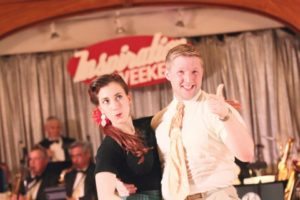 The Wolf Pack Swing Dance Club at the University of Nevada, Reno will present a Lindy Hop Workshop with Matt Richey on Saturday, April 9 from 1-5 p.m. in the Rotunda of the Mathewson-IGT Knowledge Center.

The cost is $15 for students and $25 for non-students. No experience is required and no partner is needed. Mr. Richey is an award-winning, internationally-recognized swing dancer from Nevada City, California. Read more below.

The Lindy Hop is a style of Swing Dance popularized in Harlem during the 1920s-30s. The black community combined elements of African dance with jazz music creating The Lindy Hop, a new type of partner social dance that quickly grew in appeal.

It was felt that more participation would be had by novice dancers in a 6-count variation, and the more “refined” version was created for instruction in a dance studio setting.

The Wolf Pack Swing Dance Club will host a 4-week Lindy Hop II series of lessons on Thursdays at 7:30pm in the Rotunda of the Mathewson-IGT Knowledge Center.