A fee increase for Waste Management services may be coming to residents of unincorporated  Washoe County.

A new garbage franchise agreement between Waste Management and Washoe County has been under discussion for some time, and proposed changes could mean increased costs to residents.

County residents are facing the prospect of new single-stream recycling service, and under a proposed rate structure, they will have to pay more to subsidize the new recycling bins and service offered by Waste Management. 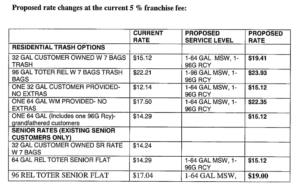 Under a new franchise agreement, fees could go up from $1 month to more than $5 per month, depending on the bin types, number of bins and levels of service (see rates graphic at right).

Most residents would see an increase of $1.72 per month for using a 96-gallon container, said Washoe Management’s Sarah Polito in December.

Commissioner Vaughn Hartung said his constituents have a number of complaints about the proposed changes, from increased costs to being able to opt out of recycling.

But many want the single-stream recycling service.

According to county documents, single stream recycling costs more in rural areas of the county.

“The ongoing issue facing a change to the current franchise agreement to implement single stream recycling in unincorporated Washoe County is the potential impact to residential rates. Within Reno and in the City of Sparks the cost of a residential single stream recycling program is subsidized through revenue from commercial customers. The county does not have sufficient commercial revenue to support a similar model thus alternatives would be necessary to equalize and minimize rate increases on unincorporated residential customers.”

Even with single-stream recycling available for city residents, nearly 30 percent of collected recyclables end up in landfill, according to Waste Management.

“In the third quarter of 2015, we reported to the City of Reno that 27.7 percent of the materials we collected were not recyclable, either because they weren’t the approved recyclables contained in the franchise agreement or the paper and cardboard had been spoiled by liquids or food,” said Waste Management spokesperson Sarah Polito. “When trash, liquid and food are placed in the recycling cart, those materials affect the recyclability of paper and cardboard. Still they went through the sorting process to eventually be recovered for landfilling. This adds to the cost of managing recyclables.

“You have heard the saying, ‘one bad apple can spoil the bunch.’ The same goes for recycling.”

“We have contaminated recycling loads that are essentially worthless,” added Waste Management’s Greg Martinelli. He said that Waste Management educates consumers about what is accepted for recycling.

Bear-proof containers are another consideration being faced by Washoe County residents in south Reno.

“One of the things we discussed … was ways to enforce that (through) violations,” he said. “It looks the cost of (a bear-proof) container (would be an additional) $7 to $9 a month.”

The commission voted to proceed with drafting a new franchise agreement with Waste Management.

If the county goes with Waste Management’s single stream recycling precedent for Sparks and Reno, residents would gain 20 excess-waste stickers and four free drop-offs of waste to area landfills or transfer stations, an effort that is hoped to reduce illegal dumping.

According to Polito, customers will be allowed to place an additional six bags, boxes or bundles without using a sticker during two four-week periods in the spring and fall.