By Carla O'Day March 24, 2016
This area near Keystone Avenue will be monitored for ancestral artifacts when construction occurs on the property. Photo: Carla O'Day. 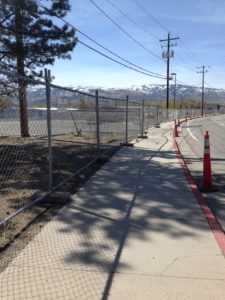 This area near Keystone Avenue will be monitored for ancestral artifacts when construction occurs on the property. Photo: Carla O’Day.

The Reno-Sparks Indian Colony plans to monitor future construction in the area of Keystone Avenue and West Fourth Street because tribal officials say relics could be underground.

The Reno City Council unanimously approved a contract Wednesday with the Reno-Sparks Indian Colony. According to the agreement, the Indian Colony would fund monitoring costs and property owners would pay up to $3,000 in archaeology fees and costs of reinterring or disposing if ancestral artifacts are discovered.

Native American artifacts were found during the ReTrac project and railroad trench excavation west of Keystone Avenue in the early 2000s. Although the site was excavated by archaeologists and refilled in 2004, the Indian Colony has indicated to the city that there could be additional artifacts and requested to monitor construction and rights to any discovered artifacts.

Michon Eben, Indian Colony manager of cultural resources, said the tribe won’t say what types of artifacts were found because there have been past instances of Native American artifacts being looted and sold online.

The agreement states the Indian Colony must be notified four days before groundwork occurs. If artifacts are found, construction must stop for up to 48 hours to allow tribal officials to evaluate the situation. If archeologists determine further excavation is necessary, the owner must set up a barrier and not work within 50 feet of the site. Construction must cease if human remains are found and notify the Tribal Historic Preservation Office.

Councilman David Bobzien said the agreement strikes a balance of being a good neighbor to the Indian Colony and eventually getting the property back on the tax rolls.

“This provides a workable way to do monitoring,” Bobzien said. “But it gives some assurance that costs and effort will be contained.”

More City Council highlights courtesy of the the City of Reno:

In the case of Standard at Reno Alley Abandonment, Council unanimously approved staff recommendation of an abandonment of an 8,000-square-foot alley between East 6th Street and East 7th Street. With the approval of the abandonment and incorporation of the abandoned area into their parcels, the applicant plans to develop a 256-unit student housing project on a 2.57-acre property consisting of 15 parcels approximately 600 feet south of the University of Nevada, Reno campus. However, approval of this abandonment does not guarantee that this project will be built, nor is it an approval of the proposed project.

In a related agenda item, Council withdrew item P.6, during which Council would have discussed transferring $100,000 from the blight fund to mitigate blight within the UNR Gateway Area. Standard at Reno deemed the use of the blight funds as unnecessary earlier in the meeting.

Council unanimously approved a contract with Tyler Technologies (parent company of New World Systems, Inc. – NWS) to begin the process of a payroll system conversion from Automatic Data Processing, Inc. (ADP) to NWS. Staff will provide notice of termination to ADP, and explore the City of Reno’s legal options concerning the financial consequences associated with the early termination.

The City of Reno contracted with ADP for payroll services and converted to the ADP payroll system in 2013. Staff has concluded that NWS will be the best choice for payroll processing going forward, as NWS has substantially upgraded its HR/Payroll module and has more functionality. In addition, the City has successfully used NWS software for financial services, which will provide for a direct interface between payroll and the financial system.

Everett the dog, a Newfoundland/Lab mix who was named Mayor of Reno for the day on February 11, 2016, was formally recognized. The City of Reno also presented a $1,000 check to the Society for the Prevention of Cruelty to Animals (SPCA) of Northern Nevada. Visit Reno.gov/News for background information.

There was a presentation detailing the upcoming Vanguard 4th Street Victory Way block party event on April 23, 2016. The event, a result of the Vanguard “Big Idea Challenge,” will be from 11 a.m. to 6 p.m. and feature a pop-up marketplace, food trucks, vendors, and visual and performing artists. Visit Reno.gov/News for more information.

Council unanimously approved an amendment to the agreement with High Sierra Industries (HSI), Inc. to provide downtown maintenance services in an amount not to exceed $100,000. The contract amendment of $25,000 was needed for the walk and clean “Downtown Ambassadors” work program to continue. In September 2014, Council approved an agreement with HSI, a domestic nonprofit corporation, and the City of Reno to provide job training and skill development programs to the disabled community, while also beautifying the downtown Reno area for residents and visitors.

The scope of services consists of seven neighborhood streets in the College Drive and 15th Street area. The project will also include sidewalk improvements in two additional CDBG areas previously approved by Council in February 2015. These areas are Montello Street from Oddie Boulevard to Wedekind Road and Valley Road from Ninth Street to Highland Drive.

Council unanimously approved to terminate the agreement with Newbean Capital to administer the Reno Accelerator Fund (RAF) loan program. The City of Reno created the RAF in 2013 as a revolving loan fund to support startups in Reno. It was funded exclusively through an annual allocation of the City’s Community Development Block Grant (CDBGs) funding from the U.S. Department of Housing and Urban Development (HUD). Because of changes in the City’s HUD Consolidated Plan, the City will not have the ability to continue using CDBGs for the RAF after June 30, 2016.

Council unanimously approved to accept the staff presentation on the City of Reno’s sustainability priorities. Among the goals in the City’s “Environment, Economy, Equity” 2016 project timeline are: a greenhouse gas (GHG) inventory, research other city sustainability programs, initiate stakeholder committees, a Sustainability & Climate Action Plan, and a community workshop.