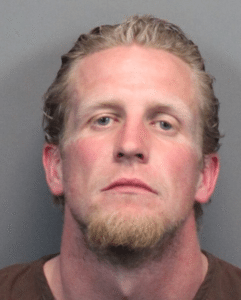 Art Indeed had a surprise visitor yesterday — a burglar who visited an exhibit and then entered the business’ attic to break into adjacent offices, according to police.

The Reno Police Department (RPD) said that Spencer Lever entered Art Indeed and used an interior ladder to go into the attic.

“Reno Police Officers conducted an interior search of the building, which also contained office space for separate businesses. Officers located the suspect, Spencer Lever, in the interior of a locked business. Lever was detained without incident,” RPD said in a statement. “Through their investigation it appeared Lever entered the business under the guise of the exhibit and entered the attic space without detection.

Business owners had their property returned to them. Lever was booked into the Washoe County jail on three burglary charges.