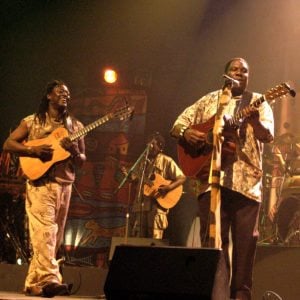 Acoustic Africa brings the African tradition of voice and song to life featuring two legendary musicians: South African Vusi Mahlasela, known for his passionate, octave-leaping vocalization, and as a collaborator with the likes of Dave Matthews Band, Paul Simon and Taj Mahal; and Malian Habib Koité, whom Bonnie Raitt called “the most amazing guitarist I’ve heard in years.”

After worldwide critical and commercial success in 2006, 2011 and 2013, the fourth installment of Acoustic Africa’s exhilarating journey focuses on the richness of the African traditions of voice and song. In 2016 Acoustic Africa will feature two beloved singers, Habib Koité and Vusi Mahlasela with a phenomenal presentation of voices and instrumentalists.

A modern troubadour with extraordinary appeal, Habib Koité‘s musicianship, wit and wisdom translate across cultures. Hailing from the musically prolific West African nation of Mali, the guitarist and composer has been named the biggest pop star of the region by Rolling Stone, delighting audiences the world over and selling more than 400,000 albums. Over the past decade, his artistry and magnetic personality have made him an international star, placing him firmly among the leading figures in contemporary world music.

Vusi Mahlasela, is simply known as ‘The Voice‘ in his home-country, South Africa, celebrated for his distinct, powerful voice and his poetic, optimistic lyrics. His songs of hope connect Apartheid-scarred South Africa with its promise for a better future. Raised in the Mamelodi Township, where he still resides, Vusi became a singer-songwriter and poet-activist at an early age. After his popular debut on BMG Africa, When You Come Back, Vusi was asked to perform at Nelson Mandela’s inauguration in 1994 and continues to spread Mandela’s message as an official ambassador to Mandela’s HIV/AIDS initiative, 46664.

In 2016 Acoustic Africa’s marketing and outreach will advance the mission of Oxfam International to meet the social, environmental, and public health challenges present throughout Africa.

A night at the Glow Plaza (photos)

A Look Back: The Floyd plays Artown (photos)