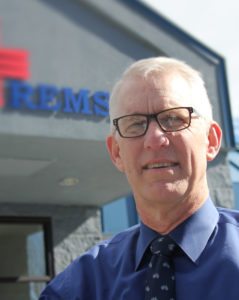 REMSA, the Regional Emergency Medical Services Authority, has announced Dean Dow as the organization’s new president and CEO. He replaces Jim Gubbels, who has retired from the organization.

“We thank Jim for his many years of service to REMSA and the community, and wish him well as he leaves the organization,” said Jim Begbie, chair of the REMSA Board of Directors. “REMSA is in excellent hands with Dean’s vast experience and leadership abilities.”

Before being named president and CEO, Dow was the executive director of Care Flight, the emergency medical helicopter program of REMSA. Prior to working with REMSA, Dow was the owner of Drawing Board, LLC, assisting in the planning of strategic growth for ground and air medical services. He also helped develop and integrate external service lines with medical centers, including the nation’s largest hospital systems.

Because of his qualifications and dedication to the field, the board of directors named Dow the interim president and CEO for REMSA in January.

Dow has also held roles such as regional vice president of Air Method’s Southeast Region where he had business and operational responsibility for 45 medical aircraft and more than 650 personnel; program director for LifeNet of New York, an organization that includes five air medical bases with 76 personnel; director of business development and quality assurance for EagleMed/Ballard Aviation, Inc., the largest regional air medical service provider in Kansas; fire chief for Ford County Fire and EMS in Kansas; and program director for Alaska Regional Hospital’s two medical aircrafts.

REMSA Health connects people to more options for care outside...

REMSA: Save 911 for emergencies