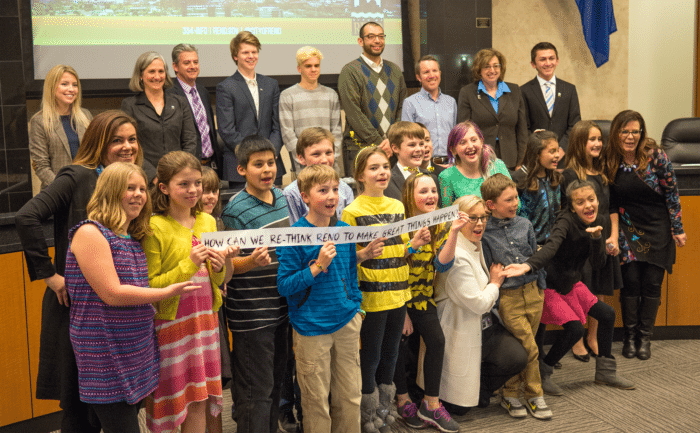 Nine student projects that ranged from transportation and infrastructure to public space and land use were presented by Mount Rose Elementary School fifth graders Friday to the Reno City Council and some Youth City Council members.

Among projects proposed were three-dimensional street art, making the former Park Lane Mall location part of Midtown, growing local food and flowers, a greenhouse, care boxes for the homeless, a trolley on a pre-built track to various sports venues, gardening that caters to bees, interactive adventures on the city’s web site and redeveloping the former Moana Pool.

Each project had a team of two or three students, and each required creative thinking and embracing open-ended questions, teacher Ana Sanchez said.

Proposals students researched would cost between $500 and $120 million, she added. The students discussed and researched things such as cost, who’ve they’ve contacted, and they took questions from council members. 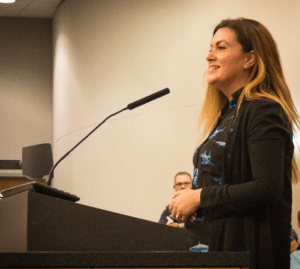 This encouraged students to become engaged, more active and to get a voice in their community, and this type of learning couldn’t happen in a text book, Sanchez said.

Mayor Hillary Schieve recently announced plans to move Plato’s Closet from Midtown into Smithridge Plaza for more space. Some students took note of it, suggesting the former Park Lane Mall —which wouldn’t be a typical mall—become part of Midtown as a one-stop local shop.

“We’ve heard, Ms. Schieve, that you’ve outgrown your business, and others may have the same problem,” said Enzo Slater, 11, who was among a team whose project was to make the former Park Lane Mall a shopping area for local businesses. “It’s not exactly a mall. It’s exclusively for local business.”

Paige Adkins and Andrea Perez, both 11, wanted to launch a project to help the homeless. They suggested collecting underwear, toiletries and other items to put in boxes for the homeless and distributing them to the shelter. Having contests between classes or schools would help donations increase.

“I’ve noticed my friends look at homeless people and get scared,” Adkins said. “I feel we shouldn’t be scared, we should be giving them hope.”

Councilwoman Naomi Duerr suggested the girls consider upstart costs and how to keep such a project going.

“The fact you’re thinking outside yourself is amazing,” Duerr said.

“I’m so impressed you’ve done your homework,” Schieve said. “You’re working with all the players we deal with.”

After noticing new things going on in Reno, including the development of the Midtown district, Sanchez tasked her students with becoming engaged.

“I thought, ‘Why don’t we ask the students what they’d like to see in their neighborhood?’”

Sanchez said this experience has prompted some students to research the Reno Youth City Council, which requires children to be 14 or older.

“It’s potentially inspiring that I could have a future mayor sitting in my classroom,” Sanchez said.

The Council is expected to endorse a project soon and have the students return to the March 9 meeting to further discuss their endeavors.

“Whether or not it (funding) happens, we really don’t know,” Sanchez said. “But the students get their campaign out there.”

Below: Reno Mayor Hillary Schieve asked the fifth graders for a group hug and got one.