About 350 Union Workers Walk Off Job at Tesla Gigafactory 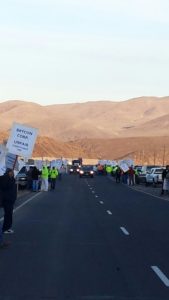 This story is developing and may be edited throughout the day.

Unions are protesting today at the Tesla Gigafactory in Storey County. About 350 union workers walked off the site, according to union officials.

All Brycon employees went through the picket line, he added. “Most of the union guys walked out. (They) walked out of the job.”

Tesla responded that it has been following state requirements for hiring its contractors.

“Today’s activity stems from the local Carpenters Union protesting against one of the third party construction contractors that Tesla is using at the Gigafactory,” according to a company spokesperson. “Their issue is not with how Tesla treats its workers. Their issue is that of the many third party contractors that are involved in the construction of the Gigafactory, many are union but the one at issue is not.”

The site today went from 400 construction workers at the gigafactory to about 60 Brycon employees this morning, Jara said.

Tesla’s spokesperson said the company is committed to hiring Nevadans, above what’s required by state law for this project.

“Hopefully Tesla gets the message as far as the substandard wages problem that needs to get fixed,” Jara said.