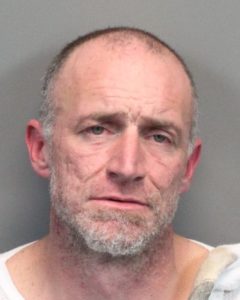 “Initially Detectives believed that 19-year-old Rylin Wolfe was the suspect in this case and also believed to be the one who fled from police Tuesday in Stead,” police said in a statement. “Several secret witness tips were received and (original suspect) Mr. Wolfe was contacted and interviewed by Reno Police Department Detectives. Based on that interview, Mr. Wolfe has been ruled out as a suspect and is no longer (being) sought.  The Robbery Homicide Unit would like to thank the community for their quick response and assistance in ruling out Mr. Wolfe as a person of interest.”

The story has been edited below to reflect these changes.

At about 10:30 a.m. Tuesday, Reno Police Department (RPD) officers made contact with a suspect in a stolen vehicle case.

He was located at a residence in Stead yesterday, and after a brief standoff with SWAT officers around midnight, Ford surrendered.  He was transported to the Washoe County Sheriff’s Office and booked for robbery with a deadly Weapon, ex-felon in possession of a firearm, grand larceny and possession of stolen property.