By ThisIsReno February 25, 2016
Ryan Brogan faces four counts of burglary, resisting an officer and contributing to the delinquency of a minor, according to the Washoe County Sheriff's Office. 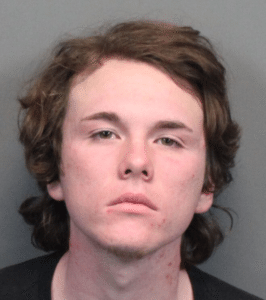 Ryan Brogan faces four counts of burglary, resisting an officer and contributing to the delinquency of a minor, according to the Washoe County Sheriff’s Office.

An 18-year-old male and an underage female are behind bars today after being arrested for burglarizing vehicles in Sun Valley, according to the Washoe County Sheriff’s Office (WCSO).

Ryan Brogan, 18, is charged with four counts of first degree burglary, said the WCSO in a statement. He also faces charges relating to resisting a public officer and contributing to the delinquency of a minor.

“At approximately 11:15 p.m. on Tuesday, February 23, 2016, deputies responded to the area of Tornado Drive and Thorn Berry Court on a report of a suspicious person in the area. Although the suspect had left the area, deputies did recover several stolen objects,” deputies said. “Further investigation led deputies to Brogan. Deputies were able to connect Brogan with four vehicle burglaries and believe he may be involved with more.”

The WCSO is asking for anyone who lives in that area of Sun Valley, who was recently a victim of a vehicle burglary, or who may have information on this case, to call 775-328-3350.