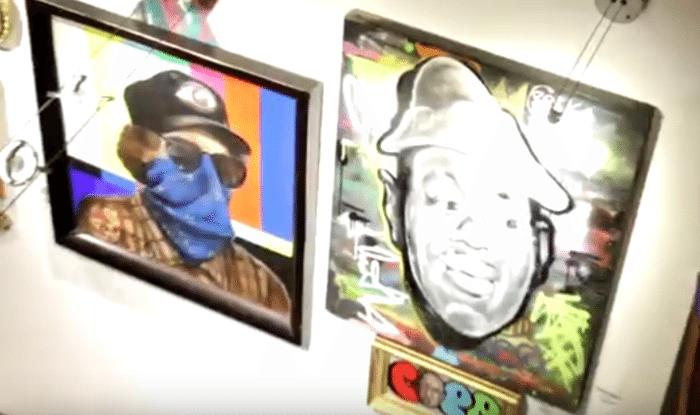 Joe has been a friend of mine for many years, and I have always been impressed at how serious he takes his art. For the past several years he has been one of the most influential street artists in the Reno area, you can see many of his works as you walk through MidtTown. His works are also featured very heavily in Art Spot’s Midtown North Mural Tour. Young and ambitious, I believe Joe is just starting to explore his potential.

As street art and outdoor murals gain interest and respect in Reno, we are seeing this work finding its ways from the streets and alleys into art galleries; this is bringing in a new depth to the work and making this form of art a bit more approachable. This is definitely the case in this show The Street Iz Watching.

Taking place at Sierra Arts Foundation, Joe C Rock’s show The Street Iz Watching was the best attended art reception I have seen at Sierra Arts Foundation. The crowd was as energetic and enthusiastic as the work being shown. As I took the work in, examining each piece in depth, I found the deeper meaning in most all of the pieces being shown. There is a feeling of found resources in creating these pieces. Taking this exhibit in I had the feeling that there was an expression of the deeper feelings of what the street has to offer than most of us can ever begin to understand.

I highly recommend going to Sierra Arts Foundation and checking out the works of Joe C Rock and see what you walk away with.

Here is a video of the reception so that you may get a feel of the energy this show brought in, but again I recommend seeing it in person.

The Shape of Things is a 2001 play by American author and film director Neil LaBute.  Directed by Stacy Johnson, the central themes in The Shape of Things focus on the nature of stoicism, art, psychopathy,intimacy, explorations of love, and people’s willingness to do things for love.  It is set in a small university town in the American Midwest and centers on the lives of four young students who become emotionally and romantically involved with each other.

The Shape Of Things opens with a post-show opening night champagne reception and appetizers from the Wild River Grille. The show runs weekly with shows Wednesdays through Sundays. Evening shows begin at 8:00 pm and the two Sunday matinees for The Shape Of Things on March 13 and 20 begin at 2:00 PM.  The second matinee is followed by atalkback with the company and the audience.  The doors open a half an hour before curtain time. (Artist night is Wednesday March 23rd at 8 PM– ALL TICKETS are $10.)  Suggested for ages 8 and up.

Race. Family. Gender. The American Dream. These themes still resonate decades after black playwright Lorraine Hansberry first wrote “A Raisin in the Sun.” Hansberry defied convention by writing the breakthrough composition, the first play written by an African-American woman to be produced on Broadway.

The University of Nevada, Reno Department of Theatre and Dance will also be breaking new ground as it presents “A Raisin in the Sun” in March with its first predominantly African-American cast. It will be the premier of the production in Reno, as well.

Set on Chicago’s South Side, the plot revolves around the divergent dreams within three generations of the Younger family: son, Walter Lee; his wife, Ruth; his sister, Beneatha; his son, Travis; and matriarch Lena, called Mama.

“You will fall in love with the family,” director Sandra Neace said. “Each of the characters has an American dream, and all of them are fighting for a dream. And each of their dreams are different.”
The tensions and prejudice they face drive this seminal American drama. The Broadway play has become a vehicle for renowned actors including Sidney Poitier, Sean Combs and Denzel Washington, who are drawn to the Younger family and their struggle. Their journey to retain dignity in a harsh and changing world is a searing and timeless display of hope and inspiration.
Neace, a University lecturer, will lead the cast of both students and community members as they tackle a production that is a turning point for the University theatre program.

“It is huge because of the racism issues that are currently affecting the country,” she said. “Theatre should be used as a vehicle for social change. The characters, conflicts and themes of this 1950s play still resonate today. Racism clearly still exists.”

The actors also can relate to many of the struggles of the characters as they tackle prejudice, gender stereotypes and family dynamics. Kennedy Hall, a recent University graduate, was cast as Ruth. She was inspired to audition for the mother and wife figure.

“I would definitely say Ruth is underestimated a lot of the time,” she said. “She keeps the family together. She is doing everything she can and working extremely hard so that she can keep them afloat. I think that is really respectable as I come from a family with strong women.”

Hall’s mother raised her and her brothers, and she saw how that strength of a woman could carry much for her family.

In the end, the drama speaks of how race and gender affect the American Dream, and how family and love can help conquer the realities of striving for a better life.