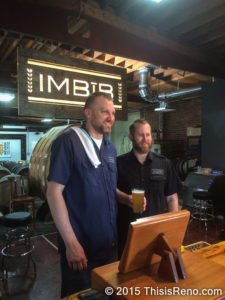 MBĪB Custom Brews announced this week that it won three medals in the 2016 Best of Craft Beer Awards, a competition featuring the nation’s best breweries.

“We are excited that our small Nevada brewery successfully competed with the best craft brewers in the country and received recognition for our hand-crafted beers,” said IMBIB’s Matt Johnson. “We are inspired and motivated to keep brewing great beer and are proud to continue serving our brews to visitors and residents of Reno out of our humble taproom on East Second Street.”

The brewery opened in May of 2015, and this is its first competition it has entered.

Brewmaster Jason Green said, “the years I spent honing my craft as a homebrewer have paid off and I am so proud that our three medals were each for our sour and barrel aged brews that I am most passionate about. I am excited to have my beer honored alongside some of the most amazing breweries in the world and look forward to making more great beer here in Reno.”