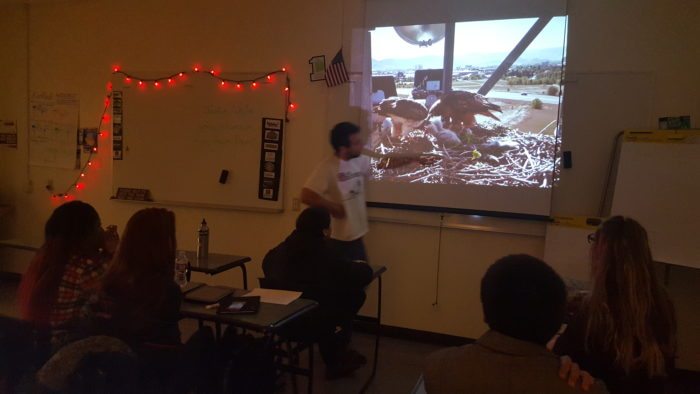 Last year University of Nevada, Reno (UNR) Hawks Project developer Justin White and his team put cameras in 24 nests around Reno. When he looked at the footage of fuzzy little chicks, he also saw unhatched eggs.

“That wasn’t what I expected,” he said while speaking to students at Damonte Ranch High School. The rate of unhatched eggs was about 15 percent, where in other cities, the number is about 4 percent.

Normally that would be a problem, but the reproduction rate in Reno is also about double that of other cities according to toxicologists he spoke with. With more hawks being born the number of eggs that are not hatching is not a serious concern.

There are a few theories as to why some eggs aren’t hatching. One is that drought dried out the eggs. But it’s just a theory. To gather more data, White is looking for volunteers to watch 70 nests around town, spending four hours at a time, logging the activity.

“Also the number of hawks that leave the nest is almost double the national average,” he said.

A third element of his research involves the fractured greenbelts in Reno. With so many greenbelts and their borders all around have different exposures to wind, rain and sun, he theorizes that each greenbelt may have diverse insects, supporting various kinds of life that may also be helpful to hawks.

But hawks don’t really need green. In fact, they not only survive in cities, but thrive. New York and Berlin have the highest rates of Peregrine Falcons in the world because there are so many rodents and pigeons.

And, he has already seen some changes as a result of this research, simply showing people that it is possible.

The main thrust of his research now is how hawks change their behavior to survive in the city. White will be giving a presentation on his findings at the Moana Nursery on March 27th at 10 AM. To volunteer, contact Justin White at 571-217-8569

White presented the information as part of a talk about the progression of his life for career education, Jobs for America’s Graduates at Damonte Ranch High School.

In high school he played football, but decided it wasn’t the kind of life he wanted to pursue. So he began to have a conversation with himself about moral code, social justice, cooperation vs. competition and even how our actions affect other countries. He began to travel.

“Its very humbling to see others doing so much with so little when I have everything and do so little,” he said.

To that, Damonte Ranch student Iain Williams asked, “When you were traveling did you meet someone who taught you new values?”

“Yes,” White responded, “But you have to listen to the older people.”

He recalled a time when he was in Greece helping refugees on a beach and there were photographers trying to get photos of the refugees. The photographers seemed to not be very sensitive. When White expressed his frustration to another refugee worker, the older worker pointed out that the photographers are people too.

“Forget unforgiveness, be able to chill and be nice,” he said adding that he learned to pursue life with an open mind, in a way that he could keep learning, exploring, living in a way that is sustainable for everyone.

That led him to one of his first adventures. He wanted to go to the Andes to study hawks. He ended up in a grass hut studying predators, staring at cages, waiting for animals to be trapped and at that point he would call a vet who would end up studying the animals.

“I didn’t know I was going to be doing this. It was really fun!” he said.

He told the students it’s important to be flexible and take every opportunity they can get their hands on. You never know where it will lead.

As a child he had taught swimming and learned to be a firefighter through volunteering. That water and rescue experience gave him the opportunity to work with the Syrian refugees. He’s learned native languages, about coyotes, learned to climb trees and poles. That is all outside of school.

“Life-long learning pushes us further in the same direction, but at some point we start connecting the dots and teaching ourselves,” he said. I meet someone from El Salvador and I know aa little about it because of my past experiences and I can start to ask questions on a global scale.”

“Don’t be afraid to do a terrible job,” White added. “I worked at two restaurants, I have lived in my car. Keep asking questions.”

Business: Another plant shop? Space Cadet is more than meets...