By Bob Conrad February 10, 2016
Man speaking during public comment at City Hall yelled obscenities and played a song from a boombox for his wife's public comment. 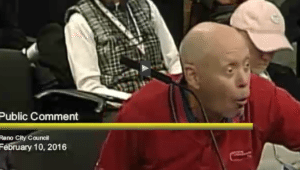 A man speaking during public comment at City Hall shouted obscenities and played a song from a boombox for his wife’s public comment.

The discussion was prompted after a man brought a portable stereo to play a song during public comment. He shouted obscenities during his comment period and then played a song from the boombox saying it was his wife’s public comment.

Councilwoman Neoma Jardon said that members of public bringing props to the council lectern has made her nervous.

“The gentleman, and that may be a strong term, that had the boombox earlier today, and he was using vulgar language, it did remind me what our policy is on people that are talking during public comment using props,” said Jardon. “Any time somebody’s plugging something in or pointing something at either us or the crowd makes me a little nervous, so … if someone wants to use something as a prop that there be some sort of police check of it maybe before they plug it in or point it at us or whatever it is.”

“I think people should be checked when (they) come through the door,” she said. “We’re very accessible when it comes to council.”

Council meetings are monitored by a Reno Police Department officer.