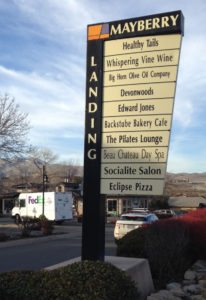 Mayberry Landing consists of several buildings on a 3.34-acre site at the southwest corner of Mayberry Drive and South McCarran Boulevard.  It was built between 1996 and 1998 and houses about 20 businesses.

Under new guidelines, businesses will be able to serve alcohol starting at 11:30 a.m. on school days and starting at 7 a.m. weekends, holidays and non-school days. Food service will continue to be required in restaurants when alcohol is served, and any patron ordering alcohol must order food.  If a non-food establishment moved in and wanted to serve alcohol, it would have to wait until 4 p.m. to do so.

Alcohol sales could go until 9 p.m. weekdays and 11 p.m. on weekends and holidays, conditions state.

Area resident Amos Stege told the Council that the demand for extended alcohol sales for lunch is overstated.

“These restrictions are working and getting rid of them is a dubious proposition,” Stege said.

“Because it’s a specific plan district, we really can customize it,” Brekhus said.

Until now, businesses in Mayberry Landing were supposed to wait until 4 p.m. to serve alcohol because of their proximity to Roy Gomm Elementary School. But at least one restaurant had been serving alcohol during lunch for years, said the city’s Senior Planner Vern Kloos.  The owners reportedly weren’t aware of the policy.

After the Council’s decision, Kloos talked about how these rules would be enforced and didn’t indicate it would be easy. For instance, business owners making sure that every member of their wait staff remind every alcohol-consuming patron to order food could be a challenge.

“We can put the information on the business license, and it’s up to the owner to enforce it,” Kloos said, adding that code enforcement would handle any complaints.

Ken Crater, who represents owners of Mayberry Landing, told council members that he’d be okay with requiring food sales with alcohol.  He also said restaurants there should be allowed to sell alcohol during lunch and compete with other area restaurants.

Crater spoke about this plan at Roy Gomm Elementary School’s Parent Faculty Association meeting in September 2015.  Safety, access and construction noise were the top concerns, according to PFA meeting minutes.

Code enforcement and police have indicated they haven’t had complaints on alcohol service at Mayberry Landing.

“The current days and hour restrictions for alcohol service and limiting the number of restaurants were based on the close proximity of this project to the elementary school to the west and its potential to adversely affect the school,” a report to the City Council said. “This center has been in operation for approximately 20 years; with alcohol service and restaurant restrictions under the current standards since 2001, with no known adverse impacts to the school from the restaurants and other uses serving alcohol.”

Also under the plan, nine townhouses and nine parking spaces would be built on the north (correction: it’s the northwest portion of the parcel) side of Mayberry Landing. A 35-foot wall between the townhouses and Gomm Elementary is planned.