This week started with a play; a play that I found very emotional. Then there was a party benefitting one of the major players in the arts in Reno. For part of this week’s article I made a video with one simple GoPro camera (I know, my photo geek is showing). Working in this simple manner seemed very freeing. Take a look at the video and let me know what you think.

Brew HaHa: Beer, Art, and Music
This was the 21st annual benefit for Sierra Arts featuring over 70 microbreweries and over 100 types of beer. Even though beer was the headliner there was much more offered at Brew HaHa.

The Artist Village was full of local art on display and for sale. This was a chance to talk directly to the artists. You will see a few of the artists in my video.

Whitney Myer provided the music and electrified the audience. There is plenty of her performance in my video.

Even though I am not much of a drinker, I had such a great time and the organizers of the event did a super job of putting on quite a wonderful party!

How important is family tradition? How important is love and companionship? These are two families who lived next to each other on farms and they dive into that very question.

The acting is wonderful and overshadows some weaknesses in the story. I do have to admit that I did shed a tear or two at the end of this show.

Go see Outside Mullingar and you will feel your heartstrings tugged.

The award winning play is set in the not­ so distant future in a virtual reality world known as “The Nether,” where the user has all power, and feeding one’s darkest desire is just a simple login away. A crime drama and psychological thriller with a hidden twist, the play centers around a young detective that dives into the realm of The Nether and uncovers something so shocking, it, triggers a dark battle over technology and human desire. Managing Director Chris Daniels states that this show was a risky choice.

“It’s a strong play to open our season with, ”Daniels said. “It speaks to what is happening right now in our society. The moral ambiguity of the internet is a pertinent and relevant topic to our  lives.” The production is directed by Eric Damon Smith, a Chicago based actor and director. Smith, a Joseph Jefferson Award nominee, has performed throughout the country, particularly in the  works of Shakespeare as well as contemporary classics and musical theatre.

Running from Friday, February 5 to Saturday, February 27, “The Nether” plays every Friday and Saturday evening at 7:30 pm, with extra shows on select Thursday evenings.

Tickets can be purchased online at Brown Paper Tickets: http://thenether.brownpapertickets.com or at the door on show nights. Tickets are $15 online or $18 at the door.

To learn more about “The Nether, visit Good Luck Macbeth’s website at  www.goodluckmacbeth.org. 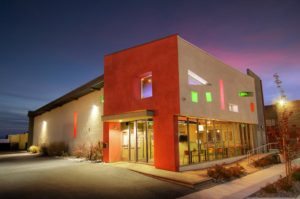 In 1926, radium was a miracle cure, Madame Curie an international celebrity, and luminous watches the latest rage– until the girls who painted them began to fall ill with a mysterious disease. Inspired by a true story, Radium Girls traces the efforts of Grace Fryer, a dial painter, as she fights for her day in court. Her chief adversary is her former employer, Arthur Roeder, an idealistic man who cannot bring himself to believe that the same element that shrinks tumors could have anything to do with the terrifying rash of illnesses among his employees.

As the case goes on, however, Grace finds herself battling not just with the U.S. Radium Corporation, but with her own family and friends, who fear that her campaign for justice will backfire.

Radium Girls is a fast-moving, highly theatrical ensemble piece for 9 to 10 actors who play more than 30 parts— friends, co-workers, lovers, relatives, attorneys, scientists, consumer advocates, and a myriad of interested bystanders. Called a “powerful” and “engrossing” drama by critics, Radium Girls offers a wry, unflinching look at the peculiarly American obsessions with health, wealth, and the commercialization of science.