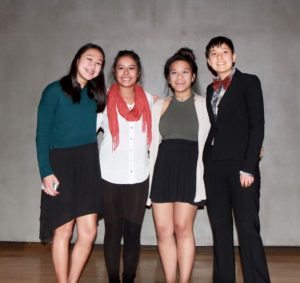 Natalie Rodriguez from Wooster High School took home first place at the Washoe County Poetry Out Loud Competition last Thursday, Feb. 25. She expertly recited “Greed” by Philip Schultz and “To the Dessert” by Benjamin Ailre Saenz, to score higher than all other 14 Washoe County district finalists. She will be advancing in the national arts competition and compete for the title of state champion, at KNPB Public Television in Reno at noon, Saturday, March 19.

In its 11th year, Poetry Out Loud is a national education initiative that encourages students to learn about, memorize, and present poetry—out loud. It’s not just about memorizing a poem, though. The district finalists’ hard work was evident last Thursday when they competed at the Nevada Museum of Art in Reno.

Each student carried physical and audible confidence, on top of illustrating their individual and unique understanding of their selected poems.

“Though the end result is a competition, the preparation for reading poetry aloud starts with understanding the language and context of the words,” said Susan Boskoff, the Executive Director of the Nevada Arts Council. “The study of poetry has been a central element of education for centuries and even though recitation itself may not be innovative, it has been missing as a part of contemporary learning.”

John Sloyan, an English teacher at Sage Ridge School echoed Boskoff’s thinking. Sloyan had two students qualify as Washoe County Finalists, Katie Woomer and Olivia Smihula. He said preparing for this competition has gotten them involved in other local poetry outlets, such as Slam Poetry — something they wouldn’t have known about had it not been for the other passionate finalists around them.

“It’s a perfect example of a community forming,” Sloyan said as the anxious competitors chattered in the surrounding seats.

Rodriguez will compete for the state title March 19. The Nevada State Champion will receieve $1,000 and his or her school $1,000 for poetry and literary programs. Those placing second and third will each receive $500 and $500 for their schools. The state champion will advance to the Poetry Out Loud National Finals on May 2 – 4 in Washington, D.C., where $50,000 in awards and school stipends will be distributed.

For details on the Nevada State Finals and the Poetry Out Loud Program, contact MaryJane Dorofachuk, Nevada Arts Council arts learning coordinator, at (702) 486-3738 or [email protected]; or visit the website.

Nine Compete to be Nevada Poetry Out Loud Champion