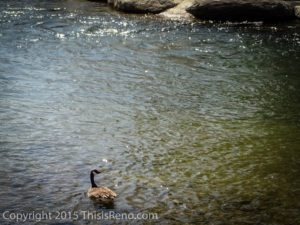 “I don’t want to be sensational or theatrical, but every flood control district in this country is financed by sales tax,” Aldean said during an hour long presentation at Reno City Hall. “That’s the normal and appropriate way for financing a project such as this.”

Between $22 million and $23 million would be needed annually during the next 18 years to fund the $412 million, 100-year project that involves levy construction. Other ways to help fund the project include imposing fees on direct benefit areas and creating a special assessment district, Aldean said.

“But at the end of the day, they’d still have to raise a certain amount of money and they’d have to have skin in the game,” he added.

It’s unclear how much money can be obtained from the federal government, although Aldean said reimbursement can be requested.

Members of the flood management authority board will discuss the issue with Aldean, before taking further steps. Two members each from the Washoe County Commission and the Reno and Sparks city councils serve on the board.

Some officials questioned Aldean on how he planned to sell a sales tax increase to the public if it gets on the November ballot. Aldean said municipalities shouldn’t be putting business owners in situations that involve having to muck out their shops every few years.

Treasurer Tammi Davis attended the meeting and voiced some concerns.

“For commercial properties, if these (fees) are high enough then I’m asked to add an amount to a tax bill that might exceed the value of what the property is,” Davis said. “It might mean unpaid taxes and unpaid flood fees.

“I’m not necessarily against it, I just want to be sure the decision isn’t taken lightly,” Davis continued. “It can affect the ability of a property owner to retain property if they aren’t able to pay.”

Construction of the Virginia Street Bridge will help flooding some, but it won’t protect all of downtown, Aldean said. Water that accumulates downtown flows south toward the airport terminals, he said. Water that breaks from Teglia’s Paradise Park in eastern Reno heads toward Sparks.

“Those last three storms were not part of analysis done when calculating (the) hydrology of our river,” Aldean said.

Aldean also said Federal Emergency Management Agency maps need updating because the maps show building elections of 1- to 2-feet too low. This is because the one-dimensional hydraulic model FEMA used in the late 1970s and early 1980s didn’t do an accurate job at calculating water surface elevation, he explained.