On a chilly, gray and windy Thursday, activists, volunteers and a handful of non-profit organizations gathered at the West Street Plaza to participate in the annual Nevada Youth Empowerment Project’s (NYEP) and Build Our Center point-in-time count. It was a chance to connect homeless youth to services that may be needed and to document the amount of homeless youth in the Reno area.

From 12 a.m. on Thursday lasting until Friday at 12 a.m., the count focused on people experiencing homelessness aged 18 to 24 years old. NYEP and Build Our Center surveyed and documented around 59 homeless youth this year. It is unclear how many children under the age of 18 were documented. 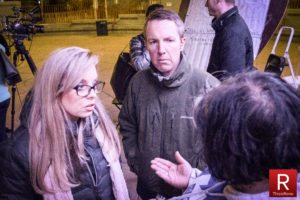 Twenty-year-old Nathan Ridgely attended the count and was grateful for the resources and items he was able to receive. The 20-year-old man balanced his new coat, sleeping bag and bag of food as he spoke of his situation.

“I’m homeless and stay and the overflow shelter at the [Volunteers of America],” said Ridgely. “[Being homeless] is pretty scary. There’s a lot of violence and people with guns that shouldn’t have guns, and people getting beat up every day. It’s crazy.”

Ridgely recently got a job and is looking forward to starting work this upcoming Wednesday. With this new job, he hopes to secure a stable home in the near future.

“Some of us are actually trying to get the hell out of this situation, you know?” said Ridgely.

The yearly count is organized by the U.S. Department of Housing and Urban Development in order to gauge how many young people we have living without a home.

According to Reno City Councilman David Bobzien, the count is vital for our community.

“So much of the funding that we receive as a community from different federal sources, for example, is derived from calculations and formulas that you have to plug the number into,” said Bobzien. “So doing this count and doing it on an annual basis is very important.

NYEP and Build Our Center organized three different tents for participants. The first tent surveyed the participants regarding their living situation. The second, large tent had clothing racks and countless numbers of resources for the participants to pick up. And the third tent was specifically allocated with supplies for homeless folks who were older than 25 and didn’t fall into the “youth” category.

The surveyed participants also received a bag of food after collecting what they needed from the tents.

There were many organizations present that offered services, including the Food Bank and HOPES, the latter of which provided free HIV testing and other medical services.

The NYEP and Build Our Center count was also an eye-opening experience for volunteers.

Reno Mayor Hillary Schieve did not just attend the event, but helped survey some of the participants in the first tent.

Last fall, the Community Foundation of Western Nevada organized Streetsmart 4 Youth, a program that raised money for local organizations helping the youth homeless population. Organizations that received money from this project were The Children’s Cabinet, the Eddy House, Planned Parenthood Mar Monte, the Sierra Association of Foster Families and the Reno Initiative for Shelter and Equality (RISE).

Volunteers claim that these kinds of events bring to light and give a human face to a section of our community that can sometimes go unnoticed.

“I think that [homelessness] can happen to anyone,” said Schieve. “There’s a lot to learn and I think this is one of the best events that this community puts on that reaches out to homeless youth.”

To reach Jose Olivares, find him on Twitter @jlosc9

Edit Feb. 1: We previously published that the count was performed by the Nevada Youth Empowerment Project’s (NYEP). Another agency, Build Our Center worked alongside NYEP to organize the count.

Poll: Mayoral candidates Schieve and Brekhus tied, most are undecided

Organizations show up in support as bus strike enters eighth...