By Skylar Owens
Donald Trump visited the Biggest Little City on Sunday afternoon to speak with those who support him the most.

A high police presence and U.S. Secret Service was noted at the rally, and Trump thanked all of the law enforcement in attendances.

“Come on up here if you would like,” he said to the officers near the stage. 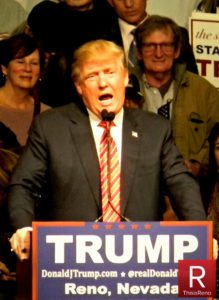 Trump spoke of many issues dominated his campaign, including his biggest competitors: Hillary Clinton, Ted Cruz, Bernie Sanders and Dr. Ben Carson. Trump dominating contenders in the polls, according to numbers that were released earlier that morning.

Trump also spoke on his views about President Obama’s recent gun control action, and how, if he becomes president, Trump said he will get rid of the Obamacare Act.

And he reacted during the rally when a woman passed out. “Is she okay?” he asked. “We can stop for a few minutes. Can we get a doctor?”

REMSA paramedics that were there, including doctors there to see Trump speak, came to the rescue. As the woman was taken out on a gurney, the audience clapped. Trump told the woman, “We love you!” as paramedics rolled her out of the venue.

According to many in the audience, Trump represents the American people. He commented on illegal immigration by asking, “Who is going to pay for the wall?”

The presidential hopeful closed out the day by promising that, “We will kick the sh*t out of ISIS!”