By ThisIsReno Published: January 2, 2016Last Updated on April 28, 2016
Cracks developed from the magnitude 7.3 1915 Pleasant Valley earthquake in alluvial soil near Lovelock. Nevada’s, largest earthquake, it was centered in Pleasant Valley, south of Winnemucca, Nevada. Photograph by Carl Stoddard, courtesy of the University of Nevada, Reno. 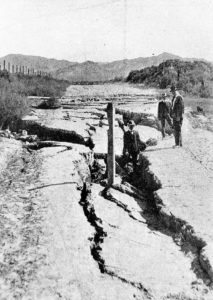 Cracks developed from the magnitude 7.3 1915 Pleasant Valley earthquake in alluvial soil near Lovelock. Nevada’s, largest earthquake, it was centered in Pleasant Valley, south of Winnemucca, Nevada. Photograph by Carl Stoddard, courtesy of the University of Nevada, Reno.

More than 17,500 Nevada earthquakes were recorded in 2015 by the University of Nevada, Reno’s Nevada Seismological Laboratory. That includes the 231 recent quakes in south Reno and the magnitude 4.8 in Caliente that shook Las Vegas in January 2015.

“While the Reno shaking is fresh in our minds, what’s really bumping the number up from the background rates is the energetic sequence in far northwestern Nevada, the Sheldon sequence,” Graham Kent, director of the Nevada Seismological Lab said.

Through 2015 there have been 4,511 earthquakes recorded in the remote Sheldon Wildlife Refuge near Vya, east of Cedarville, California. The earthquake activity that began there in July 2014 has produced 234 earthquakes greater than magnitude 3.0, and 24 earthquakes of magnitude 4.0 or larger, including the largest, a magnitude 4.8 on Sept. 14 and a magnitude 4.6 just before Christmas this year.

That leaves more than 13,000 other Nevada and eastern California earthquakes, including swarms as well as less prolonged mainshock-aftershock sequences in Caliente, Carson City and Virginia City. Outside of the persistent Sheldon sequence, Nevada was hit with 54 magnitude 3 or greater earthquakes or about one per week.

Overall, there have been 19 earthquakes of magnitude 4.0 and larger and the University’s seismological lab has reported 160 earthquakes between magnitude 3.0 and 3.9.

“The south Reno swarm that just happened produced about 30 earthquakes in two days and about 200 more in the days that followed,” Kent said. “For our entire network, we are averaging about 50 located earthquakes a day.”

They aren’t all part of identifiable swarms like Sheldon, South Reno or Virginia City.

“Many of the earthquake clusters in the Walker Lake area in 2015 were more typical sequences and not like Sheldon that has now continued for more than a year,” Ken Smith, associate director of the Nevada Seismological Lab said. “Just as the Caliente 4.8 that startled Las Vegas in May or the 4.8 at Scotty’s Castle at Death Valley in February with their fairly extensive aftershocks, in Nevada we wouldn’t be surprised to see a significant event anywhere.”