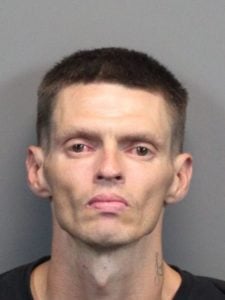 Curtis Tomlinson was sentenced this week to 25 years in prison as a habitual criminal. The sentencing is after three burglary convictions and a history of felonies in other states.

He will serve a 10 years in prison before he is eligible for parole.

According to Washoe County D.A. Chris Hicks, Tomlinson pleaded “guilty to the burglary counts in November, 2015 for his role in burglarizing several Reno and Sparks businesses during September of last year.

“Prior to sentencing, Washoe County Deputy District Attorney Matt Lee filed a charge of habitual criminal against Tomlinson, arguing that he should be sentenced as a career criminal based on his record of 12 prior felony convictions from Nevada, Missouri and Arkansas. The sentences Tomlinson received were ordered to run concurrent and he will be eligible for parole after serving a minimum of 10 years in prison.”

Sparks and Reno detectives identified Tomlinson as a suspect in several commercial burglaries. In one case, Tomlinson was an employee of a Sparks pallet company. He was identified on video surveillance footage burglarizing the business.

In another case, he was identified burglarizing two Reno businesses by kicking in a door and window to access the businesses and steal a laptop computer, a tablet computer, cash box and a credit card, which he later used.

He left behind a checkbook in his own name.

“In addition, checks from one of the businesses in the Reno case were found in Tomlinson’s wallet when he was arrested,” Hicks said. “These checks were linked to an earlier burglary of the same business. Tomlinson was also linked to a September 19, 2015 break in of a Reno dental office in which nothing was stolen.”