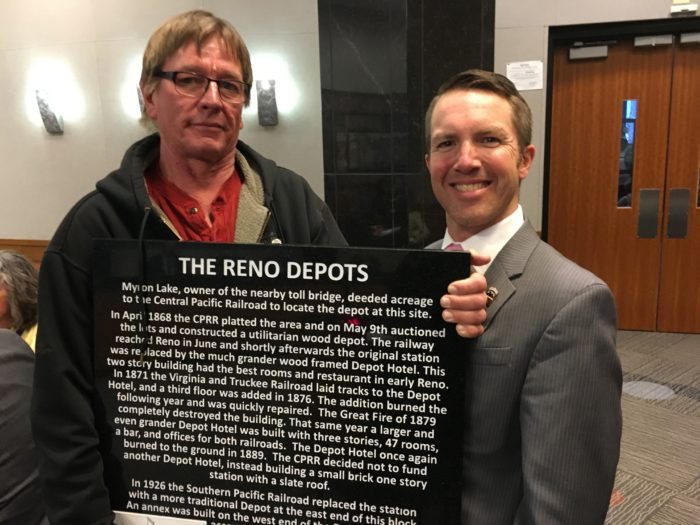 The Clampers donated a plaque at City Hall, with Clamper Tim, left and Councilman David Bobzien.

The plaque was presented to the Reno City Council to recognize a slice of Reno’s history.

The railway reached Reno in June and shortly afterwards the original station was replaced by the much grander wood framed Depot Hotel. This two story building had the best rooms and restaurant in early Reno.”

“We had a little shindig over by the train station of that day (in June of 2015),” said the Clampers representative, Tim, who presented the plaque to the council.

“Not only is it informative, it looks like it’s built to be incredibly sturdy,” remarked Councilwoman Neoma Jardon.

The Clampers would like to donate a plaque a year to the city, and Councilman David Bobzien praised the gift.

“I would like to express my thanks to the Julia Bulette chapter,” he said. (Julia Bulette was a prostitute and madam during Virginia City’s mining boom of the 1800s.) “This ancient and honorable organization is first and foremost is a service organization.”

Bobzien said there was a typo in the donation agreement.

CORRECTION: Clampus is spelled correctly on the plaque. Though it was not clear in the hearing, Councilman Bobzien said he was pointing out the typo in the donation agreement, where Clampus is incorrectly spelled as Clampis.

Wikipedia’s description of the group:

The Ancient and Honorable Order of E Clampus Vitus (ECV) is a fraternal organization dedicated to the study and preservation of the heritage of the American West, especially the history of the Mother Lode and gold mining regions of the area. The fraternity is not sure if it is a ‘historical drinking society’ or a ‘drinking historical society.'”

It is said that E Clampus Vitus has more than 10,000 members.

Myron Lake, owner of the nearby toll bridge, deeded acreage to the Central Pacific Railroad to locate the depot at this site.

In April 1868 the CPRR platted the area and on May 9th auctioned the lots and constructed a utilitarian wood depot. The railway reached Reno in June and shortly afterwards the original station was replaced by the much grander wood framed Depot Hotel. This two story building had the best rooms and restaurant in early Reno. In 1871 the Virginia and Truckee Railroad laid tracks to the Depot Hotel, and a third floor was added in 1876. The addition burned the following year and was quickly repaired. The Great Fire of 1879 completely destroyed the building. That same year a larger and even grander Depot Hotel was built with three stories, 47 rooms, a bar, and offices for both railroads. The Depot Hotel once again burned to the ground in 1889. The CPRR decided not to fund another Depot Hotel, instead building a small brick one story station with a slate roof.

In 1926 the Southern Pacific Railroad replaced the station with a more traditional Depot at the east end of this block. An annex was built on the west end of the Depot to provide access to the lowered tracks. Amtrak officially moved into the former SP Station in January 2006.