By ThisIsReno Published: January 13, 2016Last Updated on May 22, 2017
Adriana Rodriguez, 26, addresses the audience at Glenn Duncan S.T.E.M. Academy on Jan. 12. Her sister, Mayra Rodriguez, 19, was the victim of a recent drive-by shooting. Photo by Jose Olivares. 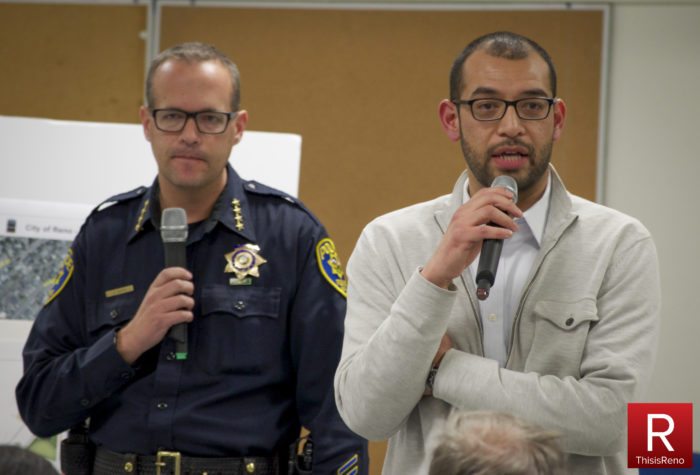 City of Reno’s Councilman Oscar Delgado and Reno Chief of Police Jason Soto scheduled and organized a meeting Tuesday night to address recent high-profile events that have occurred in the Northeast Reno neighborhood. 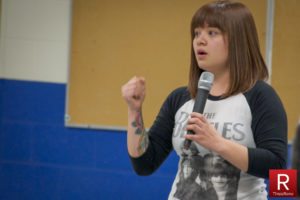 Adriana Rodriguez, 26, addresses the audience at Glenn Duncan S.T.E.M. Academy on Jan. 12. Her sister, Mayra Rodriguez, 19, was the victim of a recent drive-by shooting. Photo by Jose Olivares.

According to Chief Soto, the fatal drive-by shooting of 19-year-old Mayra Rodriguez is still under investigation. The Reno Police Department (RPD) has arrested someone in regard to the second case, which involved the fatal shooting of a 16-year-old boy by a 15-year-old. According to Soto, RPD has no leads as of yet in regards to the third, non-fatal shooting.

Soto made sure to specify that the shootings were not gang related. According to Councilman Delgado, the purpose of the meeting was to assure the community members who live in the area that they are still safe.

Soto and Delgado shared plans for the community surrounding the park, including assigning officers to patrol the neighborhood. Soto said that there used to be a designated officer who would patrol the area. In 2012, prior to having this officer, there were 290 crimes reported in the area. Crime dropped to 227 reports in 2013 after assigning the officer, but the City had to then terminate the position for economic reasons.

There were more goals presented at the meeting. Delgado plans to add sidewalks to the area around the park and replace the outdated security cameras. Ideas to initiate a neighborhood watch were bounced around during the meeting, receiving a positive response.

“It was an opportunity for the community to come out and engage in conversation and ask questions about us,” said Delgado. “What really happened is people started to ask questions among themselves. What was really enlightening is this conversation that we need to take responsibility.”

RPD is also releasing a phone application next Friday called “My RPD,” with which users can report and communicate with the police department in real-time. Soto hopes that this app will improve the community’s involvement.

As the meeting progressed, attendees were informed of programs and youth services that are available to help community members, including the Children’s Cabinet, the Northern Nevada Literacy Council and the Boys and Girls Club.

Adriana Rodriguez, 26, one of Mayra Rodriguez’s older sisters, was present at the meeting with other family members. She was optimistic about plans that are in store and hopes that the community and City follow through.

“Never in a million years did we ever imagine us in this situation and it’s hard for us to be at things like this,” said Rodriguez. “But we are [Mayra’s] voice. Being here will maybe encourage other families that have gone through this to be a little more active or proactive to help the communities around them.”

Delgado hopes that the community can come together in the future for more meetings such as this one.

To reach Jose Olivares, find him on Twiter @jlosc9.

A busy audience listens to Councilman Oscar Delgado speak in the lunchroom of Glenn Duncan S.T.E.M. Academy on Jan. 12. The meeting was in reference to recent high-profile cases that have occurred near the area. Photo by Jose Olivares.