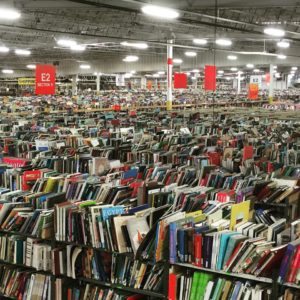 The Economic Authority of Western Nevada (EDAWN) announced that Better World Books is opening a 140,000-square-foot distribution center in Reno.

This announcement occurred at EDAWN’s Investor and Community Luncheon held January 14, 2016 at the Atlantis Casino Resort Spa. Representatives from more than 600 local businesses and other community organizations were present.

“We look forward to collaborating with local area schools and libraries to reduce waste and spread literacy and have been warmly welcomed by the Washoe County School System and Washoe County Library System, thanks to the efforts of EDAWN,” said Christine Putman, director of West Coast Operations. “Our hope is to also develop partnership programs that will translate into funding for education, literacy and libraries in the Greater Reno-Sparks area and beyond.”

EDAWN CEO Mike Kazmierski welcomed the company to the region.

“What a great addition to our community,” he said. “Better World Books will not only add jobs to our region but they support education and learning with their contributions to the school system and libraries and are committed to social and environment improvements in their industry, he said.

VIDEO: Seniors take matters into their own hands at Paradise...