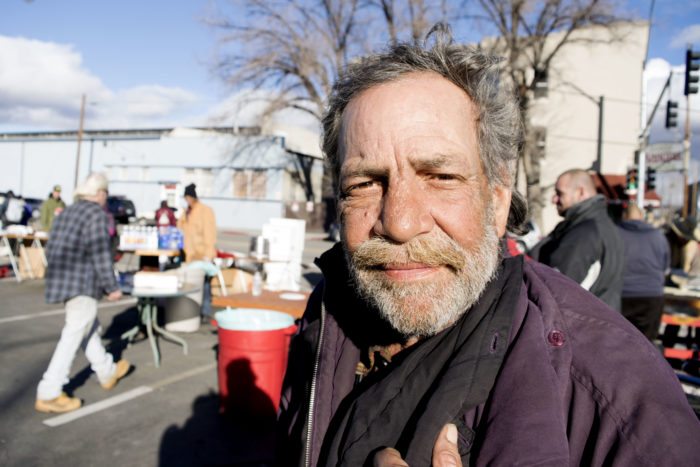 Alden Collings smiles as people gather to eat food and collect clothes. Collings was very happy with the event and hopes to volunteer in the future. Photo by Jose Olivares.

A sense of positivity and gratefulness flooded the area as lines of people assembled to get free food and warm clothing. This event, called the People in Motion Project, gave away clothing and food to Reno’s growing homeless population. 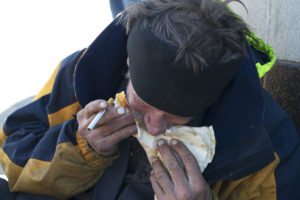 Steven John enjoys a quesadilla while sitting at Davidson’s Distillery’s parking lot. 1,000 quesadillas and 50 pounds of cheese were brought to the event. Photo by Jose Olivares.

Over 500 people were served this weekend, making the Jan. 23rd event a great success. Happy faces and a positive atmosphere seemed contagious in the area surrounding the distillery.

Food and clothes began to be distributed at around 11:30 a.m. The event continued until all of the food and clothing had been given away. Local vegan food truck Nom Eats was also present.

Later in the afternoon at around 5 p.m., an art and music exhibition was presented in Davidson’s Distillery. Over seven musicians performed, including local band Countress, who helped bring in the other musicians. Local artists also presented their work, including Anthony Ortega and Spookymayne.

Activist and artist Joe Castello was a key player in making this event happen. Without him and his big-hearted group of friends, none of this could have been possible.

“We want people to walk away with an emotional experience,” said Castello. “I kind of organized it, but there was over 50 people that helped me, that donated all their time.”

Castello, who has an avid passion for photography, cars and helping people, also has incredible connections in the Biggest Little City. He and his friends contacted the owner of Davidson’s Distillery and asked to use his lot in order to host the event.

This was a strategic move. Davidson’s Distillery is located on the corner of 4th Street and Evans Avenue, right across the street from the bus station and a block away from Reno’s homeless shelter. 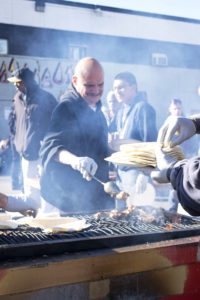 Volunteers work over the grill to feed Reno’s homeless. Photo by Jose Olivares.

Feeding hundreds of people and providing clothes was no easy task. Over 157 pounds of tri-tip and 67 pounds of brisket were prepared and smoked for 14 hours prior to the event.

There were also 1000 tortillas, 50 pounds of cheese and 20 pounds of salsa that were prepared by the many volunteers. According to Castello, over $2,000 was spent on the food, alone.

“I pawned half of the stuff in my house and sold almost everything I had [in order to fund the event],” said Castello. “But it all comes back.”

Castello and his friends have organized similar events in the past. However, Saturday’s event has been the most successful to date.

The Whiskey Sirens Burlesque group was also involved with the People in Motion Project. They were instrumental in organizing and providing the majority of the clothes that were given away.

Alden Collings could not remove the smile off of his face after having eaten and spent time with the people in the lot.

“[It was] awesome. Really well done. The food was good, the people are very nice, it’s a sunny day, everything was very good,” said Collings. For future events, Collings plans to not just attend, but to volunteer as well.

Although the giveaway was incredibly successful, organizers recognized that more still needs to be done to help Reno’s homeless population.

“I spent $2,000 dollars today and we affected over a thousand people,” said Castello. “[The City of Reno’s] budget’s huge and goes through ten different people’s hands until it goes to the people-who-need-it’s hands. They should help people directly.”

Kayla Roebling, an organizer with the Whiskey Sirens, hopes to continue to bring attention to the homelessness community in Reno.

“Today we learned a lot about the community in Reno and realizing that there is a lot of women, a lot of children [who are homeless] and it’s heartbreaking,” said Roebling. Along with Joe, this group of activists plans on hosting a Women’s Day in order to help out homeless women and families.

The next event will be on Feb. 13 at 5 p.m. at the Black Rock Drive-Inn on Dickerson Road. 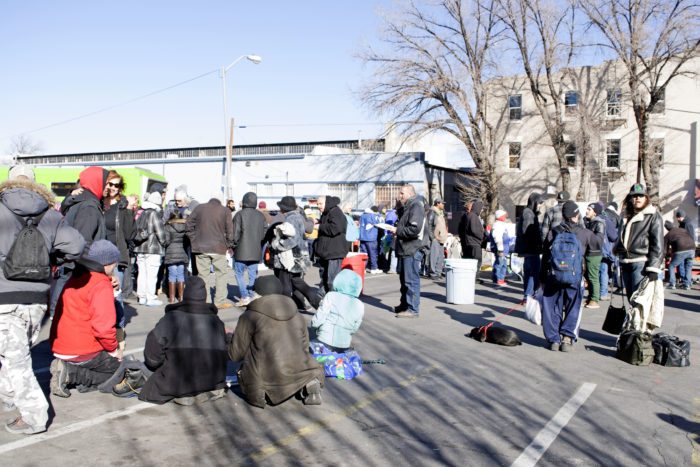 A line of people to get food and clothing assembles in Davidson’s Distillery’s parking lot. Over 500 people were served at the People in Motion Project on Jan. 23. Photo by Jose Olivares.