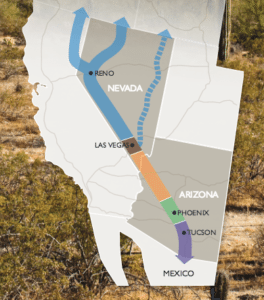 A cross-country transportation corridor is taking shape in Nevada, and an interstate highway between Las Vegas and Reno has been designated as part of the larger project designed ultimately to link Mexico and Canada.

Known as Interstate-11, construction is already underway between Las Vegas and Phoenix, but the project could also mean big changes for driving between Vegas and Reno.

“The future I-11 corridor will follow the general U.S. 95 corridor between southern and northern Nevada,” said Meg Ragonese, public information officer for the Nevada Department of Transportation (NDOT). “More study would be needed, though, before an exact roadway alignment is identified in northern Nevada.

“U.S. 95 will remain under that same name. If an existing route is ultimately used for Interstate 11, it would be renamed to I-11, with roadway improvements likely being needed in order to bring it up to interstate standards.”

The future Interstate-11 received official designation in a new federal transportation funding bill signed by President Obama December 4. It will follow U.S. 95 before connecting with Interstate-80 in Northern Nevada.

“Interstate 11 creates a key Nevada commerce corridor that connects our state to regional and international markets while opening up new opportunities for mobility, job growth and economic  competitiveness,” said NDOT Director Rudy Malfabon. “The formal designation of I-11 provides some much needed long-term transportation planning stability.”

Although the I-11 designation does not yet include funds, it will be eligible for funding along with other corridors in the U.S.