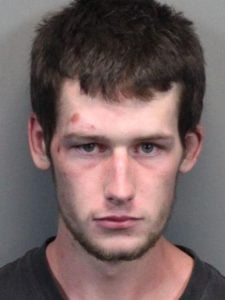 The Washoe County District Attorney’s Office has found Jared Anthony Johnson, 20, guilty of armed robbery and multiple counts of assault with a deadly weapon. These charges are from a shooting incident at the Northtowne Home Depot.

According to the D.A.’s office:

The charges stemmed from an incident that occurred around 4 pm on August 4, 2015, when the defendant, short on rent money, decided to steal tools from Home Depot on Northtowne Lane. As he exited with about $300 in stolen merchandise in his backpack he was confronted by two store security officers who observed the theft.

He tried to escape but was apprehended. He resisted the security officers and a struggle ensued. During the struggle Johnson pulled out a loaded .22 caliber revolver from his backpack and fired three times. Testimony at trial showed on the first shot, the gun was pointed in the face of one of the security officers. Before firing the third shot, Johnson stated to the female security officer, “It’s pointed at your leg, don’t make me hurt you.”

A customer passing came to the assistance of the store employees, and they were able to disarm Johnson and detain him. None of the rounds Johnson fired struck anyone.

Johnson faces up to 48 years in prison and will be sentenced on February 5th, 2016 at 10:00 a.m. in Department Eight of the Second Judicial District Court by the Honorable Lidia Stiglich.