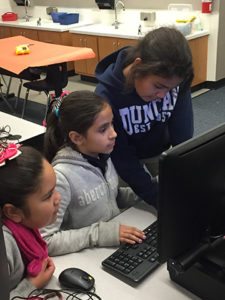 The Northern Nevada Girls Math and Technology Program offers third, fourth and fifth grade students the opportunity to learn how to code.

NEWS RELEASE
Often referred to as the “coding gender gap,” computer science continues to be a field dominated by men. While women earn 57 percent of bachelor’s degrees nationally, they earn only 12 percent of computer science degrees.
According to University of Nevada, Reno Professor of Mathematics Education & Educational Equity Lynda Wiest, this gender gap is significant.
“Of the 22 career categories classified by the United States Bureau of Labor Statistics, mathematical and computer sciences is the third highest paying,” Wiest said. “This field offers rapidly growing opportunities for women to participate in exciting and high-paying jobs.”
In an effort to recruit female students into computer science, Program Director Wiest and Assistant Program Director Heather Crawford have expanded The Northern Nevada Girls Math and Technology Program, offered as a summer program through the University’s College of Education since 1998, to include a new one-hour weekly component that takes place at Glenn Duncan STEM Academy. It is part of the school’s 21st Century After School Program and specifically targets female third, fourth and fifth grade students.
“Research indicates there is a middle school drop, where girls start opting out of STEM disciplines,” Wiest said. “This program targets students before that gap to increase interest and make sure these students don’t make a choice to drop out of something they may, in fact, be interested in and good at.”
When asked why girls tend to drop out of STEM subjects, Wiest cites differences in the way female students learn.
“Females like to see a utilitarian need for what they are doing,” Wiest said. “Girls tend to prefer something with a purpose, whereas boys will tinker with technology. Female students also like to work on projects collaboratively, which is one of the reasons they tend to turn away from computer technology.”
To address these differences in learning styles, The Northern Nevada Girls Math and Technology Program creates projects with end goals in mind. This winter, the group of 20 students has been tasked with programming a robot to compose holiday cards. Students work collaboratively to think of ideas and then split up to test their theories via computer. The software used, Terrapin Logo, incorporates purposeful math and geometry connections.
While this is the first year The Northern Nevada Girls Math and Technology Program has offered sessions at Glenn Duncan, the summer Northern Nevada Girls Math and Technology Program is designed for seventh and eighth grade students across the state. Girls stay in the University’s residence halls for the course of the one-week program, which offers female role modeling, networking and enhanced understanding of mathematics and technology.
“We’ve seen students actively engage in computer science after participating in this program,” Crawford said. “They are enthusiastic not only about the field, but also about what they can accomplish with their new-found knowledge.”