Five Things to Do & See Outside of Reno: Roadside Attractions 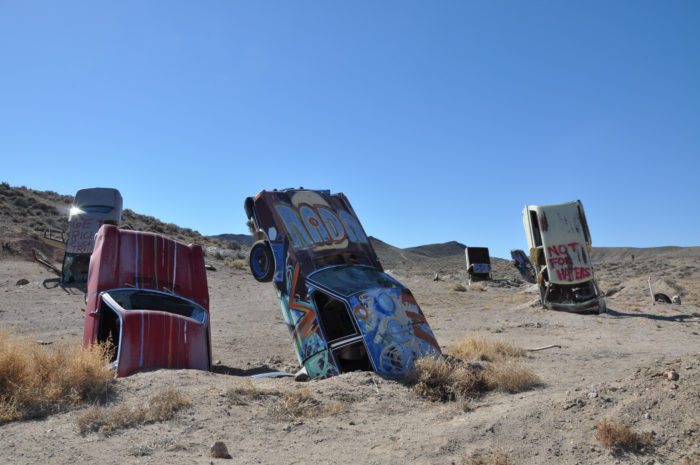 Life is a journey, not a destination: that’s one of those sayings that seems like a prescription for living life, but one that most of us forget as we rush from place to place, trying to meet obligations and commitments. This year, if you can carve out a little extra time on your life journey, check out these Nevada roadside attractions. 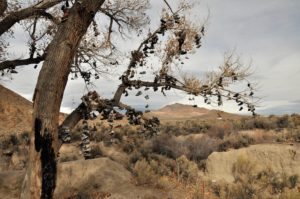 The Shoe Tree
The Shoe Tree is just east of Middlegate off U.S. 50, on the north side of the highway, about 110 miles east of Reno. This cottonwood tree, from which hundreds of shoes hang, is actually the second incarnation of the shoe tree — the original having been chopped down in 2010 by a vandal or vandals.

“We sometimes call it the sister tree,” said Fredda Stevenson, who owns the nearby Middlegate Station with her husband, Russell.

Whatever name you prefer, the tree is quirky enough to warrant a stop, and would perhaps be a good place to retire that pair of beloved old Nikes that you just can’t throw away.

International Car Forest of the Last Church
This art installation of cars halfway buried and painted is just south of Goldfield off U.S. 95, on the east side of the highway, about 280 miles south of Reno.

If you’re driving from Reno to Las Vegas on U.S. 95, the Car Forest is roughly halfway between the two cities — the perfect place to stop, stretch your legs and contemplate vehicles sprouting out of the Nevada desert. The Car Forest also has its own Facebook page, where this spectacle is briefly explained as “Nothing a bus stickin’ out of the ground can’t fix.” 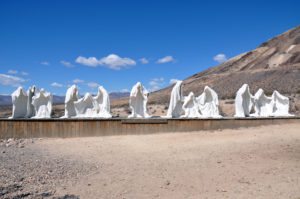 Goldwell Open Air Museum
This grouping of seven large-scale sculptures is just east of Beatty off Nevada state Route 374, about 335 miles south of Reno.
Visitors often stumble across the Goldwell Open Air Museum on their way to visit Rhyolite ghost town, which is adjacent to the museum. The Goldwell sculptures were created in the 1980s by a group of artists and today are protected and preserved by the museum. One of the most photographed is Albert Szukalski’s ghostly interpretation of “The Last Supper.”

There’s a small visitors center on site, which is usually open from 10 a.m. to 4 p.m. Monday through Saturdays, but the museum can be visited anytime. 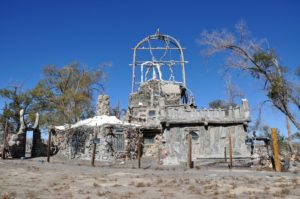 Thunder Mountain
Thunder Mountain is a collection of sculptures, rock gardens and the former home of eccentric Frank Van Zant. It’s in Imlay off Interstate 80, on the south side of the highway, about 135 miles east of Reno.

Van Zant, who died in 1989, began building the site out of found objects in the late 1960s and early ‘70s. He reportedly wanted to commemorate the original inhabitants of the area, and even changed his name to Rolling Mountain Thunder.

Today, Thunder Mountain remains a testament to an unconventional life, and an interesting stop along I-80. 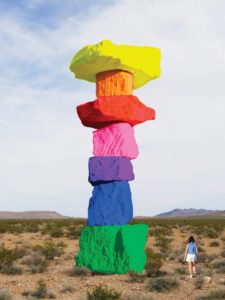 Coming in 2016: “Seven Magic Mountains”
“Seven Magic Mountains” is a large-scale public artwork by Ugo Rondinone set to go up in mid-2016. The project will feature seven massive, brightly colored totems of stones along Interstate 15, just south of Las Vegas, and will be on display for two years.

Co-presented by the Nevada Museum of Art in Reno and the Art Production Fund in New York, “Seven Magic Mountains” will be comprised of painted, locally sourced boulders reaching 25 feet to 30 feet high. The work is meant to represent destinations like Las Vegas and the juxtaposition of the natural and the artificial.