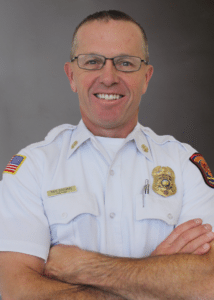 David Cochran was recommended today by City Manager Andrew Clinger to be appointed as Chief of the Reno Fire Department. Cochran has more than 17 years of experience with the department.

“I can’t tell you how you’ve changed the morale of the department,” said Mayor Hillary Schieve, who supports his appointment.

“He is calm, competent and gets the job done,” said Councilman David Bobzien.

Cochran has received positive comments from the other council members.

The City Council will have to approve his appointment at its next meeting January 13, 2016.

“I’ve enjoyed serving the community as acting fire chief, and I’m grateful that the City Manager has the confidence in me to serve as the permanent Reno Fire Chief,” Cochran said. “I’m looking forward to coming before Council in January to hear their decision.”