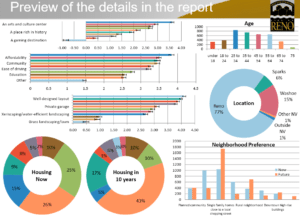 The City of Reno’s Reimagine Reno survey and focus group results are in, and citizens who participated by and large want to see Reno continue evolving as an arts, culture and outdoor destination.

“I am excited to see the community input results, as is the rest of the City Council,” said Mayor Hillary Schieve says. “The city’s initial goal was to reach 4,000 people, and we ended up receiving input from nearly 6,000. That says to me that our residents believe in the future of Reno.”

Gaming, however, appears to have been ranked low. While arts, culture and “a place rich in history” scored positively, from .5 to more than 3.5 on a 5-point (-1 to 4) scale, “a gaming destination” scored at nearly -1.

On a scale from 1 to five, here are “phrases that could describe Reno in the next 20 years”:

Negatives included downtown, blight, homelessness and safety, primarily in downtown. Respondents would like to see more of an emphasis on sustainability and the environment, connectivity with the university, education and public transportation.

“I think this growing interest in Reno’s history and in preserving its historic buildings is related to a growing sense of pride in this community as our home, with a heritage that belongs to us, and not just as a tourist destination catering to outsiders,” said said. “We’re seeing more and more adaptive reuse of historic buildings, from the breweries on East 4th Street to the little shops of Midtown and the historic downtown post office.

“It’s about identity and character and restoring that walkable environment of the past. It’s an exciting time for Reno’s history.”

ReImagine Reno is part of a two-year effort toward a new master plan for the next 20 years. It began in April and included the survey plus 60 focus group sessions.

Nearly 6,000 citizens were engaged in the process, according to the city:

The majority of respondents were 25 to 34, were homeowners and registered voters and represented all zip codes. The city said that the survey results are “statistically representative of the whole population.”

A preliminary report will be posted at Reno.gov/ReImagineReno, and the raw data will be made available on Open Reno on Wednesday.

View a PowerPoint of the results here: http://www.reno.gov/home/showdocument?id=55280