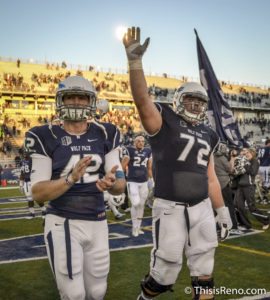 With their back against the wall last week, the Nevada Wolf Pack certainly rose to the occasion and pulled off an improbable win on Senior Day.

The game was a back-and-forth contest that Nevada couldn’t afford to lose.

The victory, a 37-34 decision before a raucous Mackay Stadium crowd. It was Nevada’s first win on senior day since 2011 and ensured Nevada would be bowl eligible for the 10th time in 11 years.

“In order to find a way in games like this you have to go through some hardships and struggles and you have to be hardened,” Coach Brian Polian said. “This team has been hardened by some disappointments. Instead of going in the tank, they continue to show their character and continue to compete and fight.”

Nevada certainly fought its heart out en route to strengthening their win lost record to (6-4, 3-2 MW). This week is another must-win as Nevada plays another strong contender in Utah State (5-5, 4-3 MW).

Utah State is a big-play offense they can strike at any time.

“It’s not death by a thousand paper cuts with this team,” said Polian.

They make explosive plays in the run game and in the passing game. Hunter Sharp, the team’s top receiving target, has big strike ability — his 46 catches for 595 yards and seven touchdowns makes him one of the top wide outs in the MW.

QB Kent Myers is equally as dangerous; he completes 60.5 percent of his passes for 1,470 yards, 14 touchdowns and two interceptions. He also rushed for 340 yards and three scores. His top target is Sharp, who has 46 catches for 595 yards and seven touchdowns.

“Defensively, very steady, very strong, very stout,” Polian said. “Not as junky as some of the teams we’ve seen play odd fronts. Not as exotic, but very steady.”

The team allows 24.6 points per game, which ranks fourth in the MW and 52nd nationally.

So both teams really need to buckle their chinstraps and lace up their cleats because this game won’t be for the weak of heart. This game is about status.

Nevada became bowl eligible with last week’s win, but each win moves Nevada up that ladder to possibly play in a bigger bowl game and find a way to get into the MW Championship Game.

Plus Nevada could all but wrap up a certain bowl berth with a win over Utah State or San Diego State in the next two weeks. It’d be more difficult to leave out a seven-win Pack team over a six-win team.
Utah State has a bit more work to do to clinch a bowl game, and their hunger to get there should be on full display this week.

Overall, this game is another key cog in the crazy race for supremacy in the MW. Saturday’s victor will all but certainly prove they belong in this tailspin conference.