With five original short plays (each one under an hour) by local aspiring playwrights this was certainly a showcase of talent and originality. Taking place in Sub-Bruka (the smaller theater in the basement of Bruka), it brings an intimacy to the performances and a connection to the performers.

First up was “Hear and Obey” written and directed by Sheldon Haun. Deliciously confusing with a story missing elements of the continuity of a back story this play made me smile with the realization that no back story was even necessary. This was just fun. 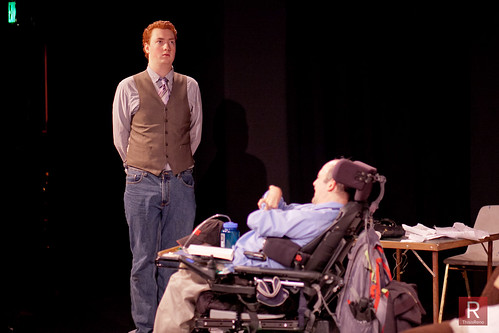 Next was “Rez Dogs Start Wailing” written and performed by Everett George and directed by Dwight George. Taking on the very tough subject of sexual abuse as children the characters share their experiences growing up with an abusive boyfriend of the mother of the brothers. This was a deep and thoughtful play that showed the maturity of the writer.

The actors and the writer are all Native American and brought some elements of growing up in their community to the flavor and feel of the performance. I hope to see more of Everett in the future as both a writer and an actor.

The third play I saw was “New Canula” written by Gary Cremeans II. Stellar acting and very well thought out story bring a depth of quality to this performance that has the potential to go further than the Reno area. I am hopeful that there will be more of this story to come.

Fourth on the agenda was a very fun production of “The New Dick Law Spinoff Show” Written, Performed, and Directed by Branden Trefethen. This was the shortest of the plays and was performed as a sit-com. Following the life of a troubled lawyer, in a short time we feel as though we have known the characters for years.

The fifth and final offering was a one man show; Lo-Fi Story Time: Modern Day Bard written and performed by Todd Mauldin and directed by Tony DeGeiso. A one man performance with storytelling and music this was pure entertainment from a very talented man.

Watch the video for some thoughts from the writers and take a look at the photos..

I am already looking forward to next year’s festival.

Good Luck Macbeth is offering their final production of the season; Grounded. From the award-winning playwright of Elephant’s Graveyard, George Brant, comes the story of an ace fighter pilot whose career in the sky is ended early due to an unexpected pregnancy. Reassigned to operate military drones from a windowless trailer outside Las Vegas, she hunts terrorists by day and returns to her family each night. As the pressure to track a high-profile target mounts, the boundaries begin to blur between the desert in which she lives and the one she patrols half a world away…
Opening November 12th and running through November 28th. Here is a link to GLM’s website for more information: http://www.goodluckmacbeth.org/

Closing Reception Nevada Woodchucks
The Nevada Woodchucks are a non-profit educational organization (501-C3) dedicated to teaching the skills of woodworking in the Northern Nevada area. Their goal is to promote woodworking skills for members and the public by offering programs and learning opportunities, while benefiting the community. More than 70 pieces will be on display November 19th 5pm – 7pm at Sierra Arts. Here is a link: http://thisisreno.com/events-calendar/closing-reception-nevada-woodchucks/