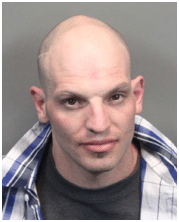 Reno Police responded this morning to a report of shots fired at a Motel 6 on South Virginia Street.

A male victim was found on scene with a non-threatening gunshot wound to his leg.

The victim said the he had attempted to intervene in a couple that was arguing in the parking lot.

The male half of the couple shot the victim and left the area on foot.

The suspect was identified as Antonio Mogros.

It was determined that Mogros may have been in one the hotel rooms but he was never found after several hours in which Plumb Lane was shut down to traffic.

RPD is searching for Mogros and warn that he is considered armed and dangerous.