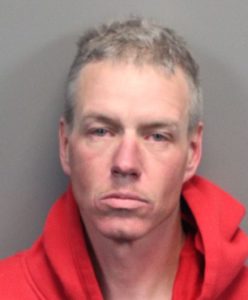 ‘Tis the season for burglary, apparently.

The Washoe County Sheriff’s Office announced today the arrest of Kyle Douglas Fitch, 45 of Fernley, who fled from police last week after he was seen near the scene of a burglary in Caughlin Ranch.

Sheriff’s Office deputies were responding to a report of a vehicle burglary that had just happened, and deputies identified two burglarized vehicles. Deputies also found out that Fitch had used garage door openers to enter and burglarize homes.

According to the Sheriff’s Office, “Fitch was identified and stopped as he attempted to leave the area. Deputies discovered property stolen during the burglaries in Fitch’s possession, and he was arrested.”

Fitch was booked into jail on multiple counts of burglary,  one count of possession of stolen property and one count of resisting a public officer.

The Sheriff’s Office is asking anyone living in the Caughlin Ranch area who has been the victim of a vehicle or residential burglary to contact the Washoe County Sheriff’s Office at 775-785-WCSO.