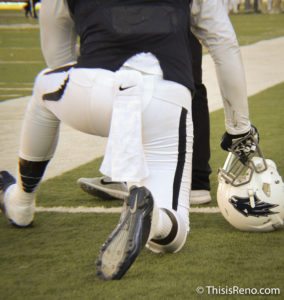 The Nevada Wolf Pack has certainty had its fair share of ups and downs this season. The Wolf Pack essentially had the opportunity to control its own destiny coming into this week vs San Diego St. All Nevada had to do was win out.

The prospect of this was rather encouraging going into the third quarter of last week’s game against Utah State. Nevada was up on the road 27-7. All Nevada had to do was close the game to give themselves a fighting chance to do something miraculous on the year.

Unfortunately for Nevada, Utah State was able to haul off 24 straight points that dropped Nevada’s record on the year to (6-5, 3-3 MW).

“You can’t make the mistakes we made, we didn’t play well in all three phases. But the reality of it is we didn’t play well and we didn’t deserve the win. There’s no medals for trying. I’m not happy that it was a close game. It was a game we should have won,” stated Coach Brian Polian.

This has been the tale of Nevada’s season thus far losing games they should win. However, there is no rest for the wary because Nevada will finish their season off against the best team in the Mountain West San Diego state.

San Diego State boasts a record of (8-3, 7-0 MW). SDSU’s style as a team isn’t pretty. Imposing their will is a big part of their dominance. SDSU runs the ball down the other team’s throat. The Aztecs run on 71 percent of its plays, one of the highest figures in college football.

Donnel Pumphrey is a large reason why SDSU can tote the rock at such a demanding pace. Pumphrey has 1310 yards and 14 touchdowns. His backup, Chase Price, has added 777 yards and five scores.

QB Maxwell Smith is very efficient as well with 1,485 passing yards, 13 touchdowns and only two interceptions. His lead Wide Receiver happens to be Pumphrey as well he leads the team with 24 receptions.

Pumphrey is pretty important. SDSU averages 31.8 points per game. As you might expect with their staggering run numbers. SDSU does a great job of controlling the ball, holding it for 32 minutes, 32 seconds per game (22nd nationally). The Aztecs have only 11 turnovers, which ranks 11th nationally.

All in all Nevada has its hands full. Nevada has picked the worst time in the season to put themselves in a back against the wall situation.

Although Nevada made itself bowl eligible. They are in a weird situation.

The Mountain West is in a logjam every team in the middle tier of the division possess the same record at (6-5) or (7-4). With limited MW bowl games and Nevada’s key losses, would the selection committee put Nevada in a bowl game?

Today’s game is key, with a seven-win Pack team, a key win is more attractive than a six-win Pack team with a number of bad losses such as Wyoming and UNLV.

Nevada is in a tough situation and the only remedy for them is a win.