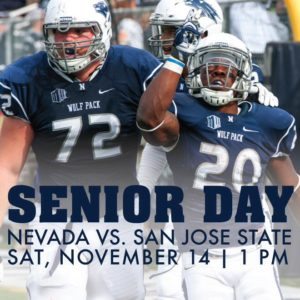 Nevada has to start stringing some key wins together if they want to win their division and try to make it to their second straight bowl game. This week’s win against Fresno State will go a long way to help Nevada’s claim.

The Wolf Pack had some big breaks go their way as they snatched a rare win over Fresno St 30-16. It was a full team effort. The team capitalized on some big performances from Matthew Lyons as he returned a fumble 30 yards for a score on the game’s first possession.

The offense was sparked in large part by Hasaan Henderson’s 73-yard touchdown catch in the second quarter and James Butler’s 59 yard run in the fourth. Freshman Dameon Baber also played a large hand in the win with three interceptions.

“That was something Coach (Brian) Polian harped on the whole week — we needed to make big plays, explosive plays,” said WR Hassan Henderson, who had five catches for 136 yards and a touchdown. “Coach said we needed at least three on each side and it happened. He was excited about that and so were we.”

Nevada’s win last night did two things it advanced their record to (5-4, 3-2 MW) they also snapped its three-game losing streak against Fresno State who’s record falls to (2-7, 1-5). Nevada, also set itself up pretty well in the standings. Nevada is one win away from bowl eligibility.

They return to action Nov. 14 when they host San Jose State on senior day. Senior Linebacker Matthew Lyons had the quote of the night after the game.

“We have one more month together with each other, so we want to make it special,” said Lyons.

The team has a common goal in mine. Win together one last time. It doesn’t get any more special than winning a division and playing for the Mountain West title and eventually playing and winning a bowl game.

These goals are all in reach. All Nevada has to do is build off last night’s win.