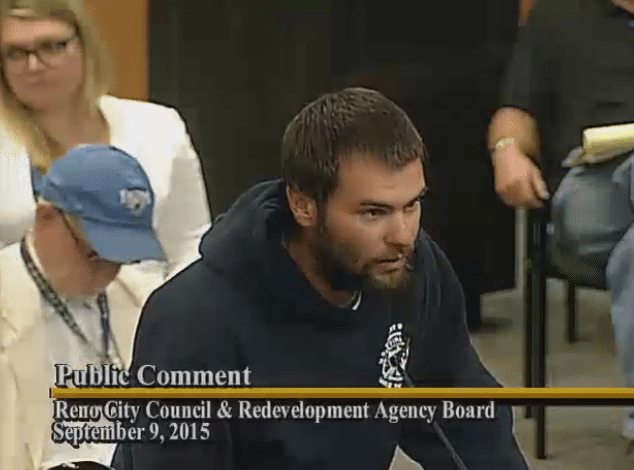 Ross Tisevich, 28 of Fallon, was ordered today in Reno Justice Court to 180 days in jail and 120 hours of community service. He was also ordered to undergo a mental health evaluation and pay $250 in restitution for disrupting a city-county meeting September 21, 2015.

His jail sentence was suspended for two years if he serves 30 days in jail with credit for 11 already served, according to the Washoe County D.A.’s office.

“Judge (Scott) Pearson sentenced him to 40 hours of community service in addition to the 80 hours this office had advocated for,” said the D.A.’s office PIO, Michelle Bays. “This provided that 40 hours be served for each community represented at the meeting where the incident took place, which included Reno, Sparks and Washoe County.”

He was arrested for attempting to drink what was said to be Round-up weed killer at the September 21 public meeting, which shut down the meeting for hours after the incident.

Tisevich pleaded guilty on September 30, 2015 to one misdemeanor count of disturbing a meeting.

Tisevich, who was going by Tisarich at public meetings and on Facebook, was repeatedly protesting what he said was the City of Reno poisoning Truckee River water with weed killer.

City staff said that it does not spray weeds in the river corridor but does maintain a weed management program along the river in order to manage invasive weeds such as tall whitetop.

Tisevich is not to have contact with county commissioners or city council members for the duration of his sentence, said Bays.