By ThisIsReno Published: November 1, 2015Last Updated on November 2, 2015
Strawberries growing in a hydroponic chamber inside the greenhouses at the University's Nevada Agricultural Experimentation Station. 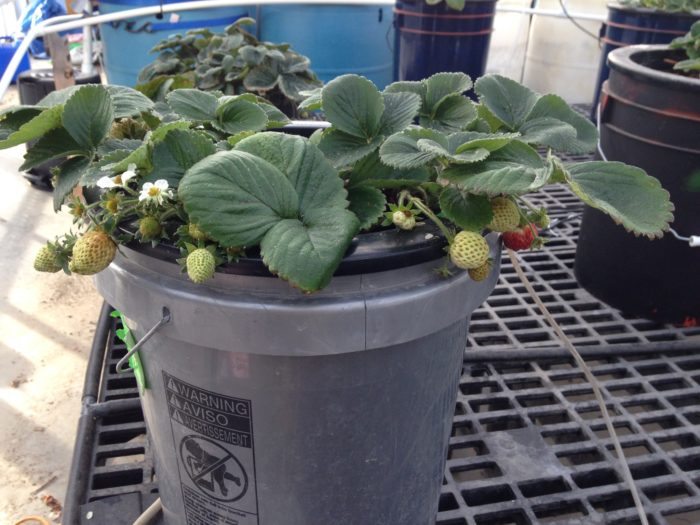 Strawberries growing in a hydroponic chamber inside the greenhouses at the University’s Nevada Agricultural Experimentation Station.

”Significantly higher vitamin levels were also found in the hydroponically grown strawberries compared to the soil-grown strawberries. The soilless strawberries were higher in vitamins C and E as well as total polyphenolic compounds which serve as antioxidant protection for the body,” researcher and graduate student on the project Chenin Treftz said.

With raspberries, however, the researchers found no significant differences except for levels of vitamin C which were slightly higher in the soil-grown berries. The team conducted taste panels with University students and overall they could not tell the difference between the soil-grown and hydroponically grown fruit.

One of the goals of the project was to address regions that are considered food deserts. The U.S. Department of Agriculture estimates that 23 million Americans live in food deserts with inadequate access to healthy, affordable and fresh food.

Research to analyze the growing systems was being led by Stan Omaye, professor and department chair of the Agriculture, Nutrition and Veterinary Science Department, director of the Environmental Sciences Department and director of the Health Graduate Program.

The project began in late 2013 and analyzed the nutrient value of soil and soilless strawberries and raspberries. It also evaluated the differences in bioactive compounds between the two growing methods, and if consumers could tell the differences between the fruits that were soil-grown and hydroponically grown.

During the two years of the project, the team analyzed levels of ascorbic acid, vitamins, glucose, fructose and total polyphenolics. They also analyzed moisture content and brix in the fruit, which is an important quality indicator that can influence the fruit’s texture and flavor, as well as shelf life.

Treftz said that future research should investigate the growing systems and different ways to grow hydroponics. She added that their method was one way to grow the berries and it would be good to expand research to see if other growing methods will yield different results.

“Hydroponics has a lot of positive overtones because of the environmental benefits it can offer like using less water, less pesticides products and can have higher yields,” Treftz said. “We were trying to investigate a lot of these benefits with hydroponically grown raspberries and strawberries because we haven’t seen that in literature yet.”

Omaye and Treftz say the advantages allow soilless systems to address several environmental issues while providing sustainable systems in food deserts, in arid or urban regions and areas affected by the drought.

“Providing sources of high quality and safe fruits and vegetables for Nevadans, especially children, the elderly and vulnerable populations is a lofty goal,” Omaye said. “Nevadans, for the most part, live in arid rural and urban areas with short growing seasons, which limit the region’s capacity to produce fruits and vegetables. Local communities and individuals are moving toward using a variety of alternative farming techniques, such as hydroponics, aquaponics and hoop houses to grow fresh fruits and vegetables.”

He added there is little research dealing with the impact of such farming techniques on the quality and safety of fruits and vegetables. The research also addresses the viability of greenhouses and hydroponics as an alternative to outdoor crops.

Treftz recently won an award for her research and received the recognition at the 2015 Food & Nutrition Conference & Expo’s annual meeting for the Academy of Nutrition and Dietetics. She was awarded the 2015 outstanding poster presentation by a graduate student at the event. The Academy plays key roles in shaping and improving the nation’s health and nutrition through research, education and advocacy.

“We are honored that Chenin was awarded the 2015 outstanding poster presentation by a graduate student, a testimony to her fine work and the significance of her research,” Omaye said.