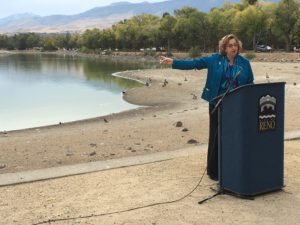 But today at the Reno City Council meeting, councilmembers expressed frustration with Silverwing Development which, councilmembers said, was going to donate $116,000 to help with the water quality improvements.

At stake was $116,000 to be donated by the developer. According to Councilmember Naomi Duerr, she was told by city staff last week that the Silverwing was withdrawing the donation.

That didn’t sit well with the council.

Duerr said that, “we did have an understanding. I do think that the developer should be providing us with an explanation.”

“You know what a great explanation is? A check,” she said.

The city had to use money from the Truckee River Fund instead for the water quality improvements.

J. Witt of Silverwing Development was quoted by RGJ’s Anjeanette Damon saying he is withholding money over a labor ordinance.

Duerr responded: “I think he’s referring to the electrician and plumber licensing (which is a separate issue). We were working closely with him. He did some good things on the dog park. He provided in-kind services.

“When he told staff he was withholding the money, staff went ahead and applied for funding from the Truckee River Fund,” Duerr added. “He made a commitment. We signed a contract. We were expecting him to fulfill it. We were informed anecdotally through our staff that the money was not forthcoming.”

Witt said, however, that “the city defaulted on the agreement as the project was not commenced within the time limits required. This donation agreement came in after the city decided to take the project over after I had spent a year of time and our funds to create engineering to help in the water quality. I emphasized at the time that the donation was time sensitive, as the agreement required work to commence by June of 2015. ”

He said that he had spent a year of his own time working with University of Nevada, Reno professors trying to design a plan to clean up Virginia Lake’s water that could be presented to the city.

“I had engineering work undertaken on an underground water circulation system,” he said. “I spent money out of my own pocket to do this with the hope the City would see value in the concept.”

When the Edge Water condos at Virginia Lake started breaking ground, “I had wanted to tell prospective residents that something was being done with the water quality at the lake. An agreement was drafted with the city, which stated by June 20th, the City was obligated to commence the project, as this would then allow me answer questions by potential residents on this issue.

That didn’t happen, Witt said. In the meantime, he was approached by a citizen’s group to help clean up the Virginia Lake dog park.

“Initially my thought was to bring in contractors at cost and oversee that work but not fully fund the effort, since I was also planning to fund the water quality project. Since the lake design was not proceeding as scheduled, we funded, contracted and oversaw the renovation of the dog park” he added. “Then this labor ordinance gets dropped on us. In its current form, it would put us entirely out of business in the city of Reno as it would wipe out the housing labor force.

Witt said he is frustrated.

“There won’t be a lot of donations from the development community if you wipe out their ability to be profitable,” he said. “I’m a little frustrated that there’s this attitude of a quid pro quo. I did not come up with this labor ordinance, nor was it even suggested at the time we entered into the initial donation agreement. If the labor ordinance is passed in its current form, I’m going to lose money on this project, so we cannot consider entering into a new donation agreement with those results — that is simply common sense.

“I’m trying to be reasonable here. The donation agreement gave the city more than a year to do the design and commence the project. That did not seem to be progressing at the pace, so we focused on the dog park instead. I am not sure why this is coming up today as I informed the City on September 8 outlining the default in the agreement, but stated in writing at that time, that our hope was that we could still participate once the labor ordinance was resolved.

“I did not get any input until today,” he added. “My hope is that this can all be worked out and we can continue to not only improve the quality of life in northern Nevada through our developments but also by participating charitably by addressing local needs.”