VIDEO: Homeless Advocates Speak Out After Shutdown of Camp 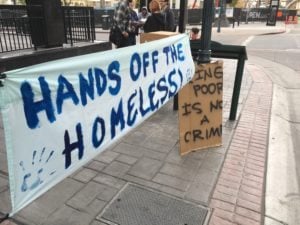 Homelessness was a huge topic to at today’s Reno City Council meeting. Members of Reno’s homeless community and  advocates spoke during a lengthy public comment about a recent shutdown of camp at Sixth Street and Wells Avenue.

According to city officials, complaints were made by residents and businesses about sanitation, health issues and debris at the location.

Reno Police Chief Jason Soto said that the site was cleaned up for health and safety reasons.

“It wasn’t necessarily safe for them to be there,” he said. “A lot of it had to do with sanitary conditions.”

Soto said that a fence was placed around the property.

“I instructed our officers not to make any arrests and to provide resources to the homeless individuals to see if we can get them help from the community or family members,” he said.

Advocates said that the homeless have been treated unfairly by police.

“I’ve been harassed by the cops constantly,” one homeless man said during public comment at the meeting. “My experience with the (Record Street) shelter … they’re playing games with the homeless.

“I don’t know the answer,” he said in frustration. “Bathrooms are important. Access to water is important. Trash bags aren’t the answer.”

Mayor Hillary Schieve asked what would help him.

“(To) stop being harassed by the cops while I’m sleeping,” he said.

Schieve commended him for speaking.

“I want to commend you for coming here today and I’m sorry you’ve had such a bad experience in our shelters,” she  said.

Advocates stressed that the homeless aren’t getting respect from the city and law enforcement.

City Councilmember Paul McKenzie countered that businesses have rights too and are concerned about the homeless defecating on their properties.

Respect goes both ways, he said.

Joshua Livernois, who works with Northern Nevada HOPES, said: “We’re trying to get people of marginalized communities into the services that they need (and) trying to get them to find their own voice.

“Myself and the Reno Police Department, we know a lot of these individuals, (some) on a pretty personal level,” he said. “We understand that mental health is a very challenging subject, and we take that very seriously.”