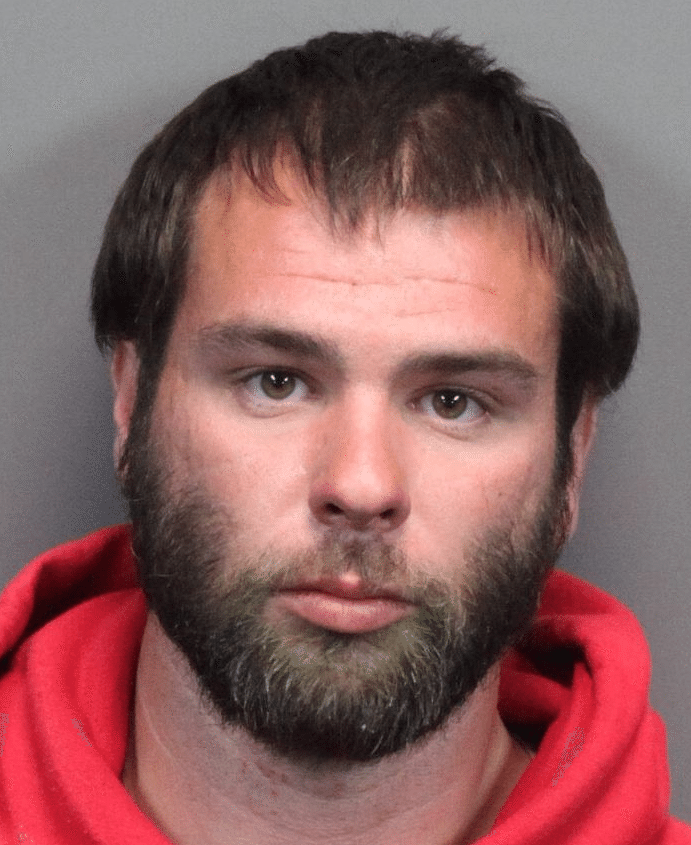 Ross Tisevich, 28, of Fallon pleaded guilty this week to a misdemeanor crime of disturbing a public meeting.

“Prosecutors determined that the evidence did not support the more serious felony charge and the decision was made to charge it as a misdemeanor. Joseph Benedickt, who was arrested with Tisevich, was not charged by this office,” said the D.A.’s office in a press statement.

Ross Tisevich, 28, of Fallon was arrested today during a joint meeting of the Reno City Council, Sparks City Council and Washoe County Board of Commissioners.

During public comment, Tisevich, who’s been advocating against pesticides, threatened to drink from a bottle of weed killer.

Joseph Benedickt, 24, was also arrested and charged with dispersal of a hoax substance.

Officials said they feared it could have been a weapon or hazardous substance and said that they were in attendance at the meeting based on past comments by Tisevich at city government meetings.

The meeting had to be postponed in order for a hazmat crew to verify the substance, which turned out to be water mixed with Jell-O.

“It appeared to be predominantly water with sugar dissolved in it,” one official said. “It does not appear at this time to pose a threat.”

According to a Facebook profile for one Ross Tisarich of Fallon, he posts a lot of anti-GMO, anti-Monsanto and anti-pesticide imagery.

At the September 9, 2015 Reno City Council meeting, Tisevich spoke during public comment at the beginning of the meeting.

“Do something about it!” he repeatedly demanded in a raised voice. “I am really upset about this.”

Councilmember Noami Duerr said that pesticide spraying was occurring along the Truckee River and roadways.

“I did some research on this, and I did discover we are spraying chemicals, not just along the river, but along the roads to deal with weeds,” she said. “It’s probably a bigger problem than pesticides in the parks. I’ve already explained to Ross that it’s going to take some time but we are going to research to find out if there are alternatives. It’s not just a City of Reno problem; it’s a universal problem.”

Tisevich is facing three charges: disturbing a meeting, destruction of property and dispersing a hoax substance, a felony.

Mayor Hillary Schieve tweeted her appreciation to law enforcement for their quick action.

Although generally considered safe if used a prescribed, glyphosate, the active ingredient in Roundup, faces enduring criticism, especially among anti-GMO activists. Its maker Monsanto says it’s the most rigorously tested herbicide and is safe if used as directed.

The World Health Organization’s International Agency for Research on Cancer (IARC) this year said that the weed killer is probably carcinogenic to humans.

A scientist on the IARC panel later clarified in the New Yorker that the weed killer is something “to be a little concerned about.”

The panel of seventeen scientists from around the world concluded that glyphosate could be dangerous. The organization evaluates data collected for previously published peer-reviewed studies—which is a valuable service—but it does not conduct its own research. “ ‘Probable’ means that there was enough evidence to say it is more than possible, but not enough evidence to say it is a carcinogen,” Aaron Blair, a lead researcher on the I.A.R.C.’s study, said. Blair, a scientist emeritus at the National Cancer Institute, has studied the effects of pesticides for years. “It means you ought to be a little concerned about” glyphosate, he said.