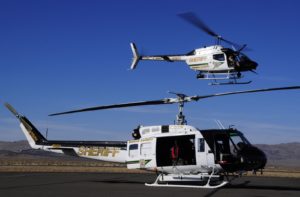 The helicopter was on patrol over downtown Reno when it was struck by a laser coming from Rampion Drive in Sun Valley.

The Sheriff’s Office is seeking the public’s assistance in identifying the person or persons responsible for pointing the laser at the helicopter.

According to a statement by the Sheriff’s Office, “While attempting to determine an exact location, both the pilot and tactical flight observer were struck several times by the laser in their eyes. As a result of the laser strikes, the helicopter was forced to land at the Stead Airport. Both the pilot and observer were taken to a local hospital for treatment and have since been released.”

RAVEN Chief Pilot Deputy Doug Russell said that “laser strikes on aircraft is an increasing problem in the Truckee Meadows area. Besides RAVEN, CareFlight and commercial airlines have also reported laser strikes in the recent months.”

Aiming a laser at an aircraft creates a safety risk that violates state and federal laws, Russel said.

Secret Witness is offering a $1500 reward for information leading to the arrest and conviction of the person responsible for this incident.