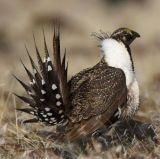 DENVER, CO – An unprecedented, landscape-scale conservation effort across the western United States has significantly reduced threats to the greater sage-grouse across 90 percent of the species’ breeding habitat and enabled the U.S. Fish and Wildlife Service (FWS) to conclude that the charismatic rangeland bird does not warrant protection under the Endangered Species Act (ESA). This collaborative, science-based greater sage-grouse strategy is the largest land conservation effort in U.S. history.

U.S. Secretary of the Interior Sally Jewell made the announcement earlier today on Twitter with a video that explains why the sage grouse decision is a historic and sets the groundwork for a 21st century approach to conservation.

The FWS reached this determination after evaluating the bird’s population status, along with the collective efforts by the BLM and U.S. Forest Service, state agencies, private landowners and other partners to conserve its habitat. Despite long-term population declines, sage grouse remain relatively abundant and well-distributed across the species’ 173-million acre range. After a thorough analysis of the best available scientific information and taking into account ongoing key conservation efforts and their projected benefits, the FWS has determined the bird does not face the risk of extinction now or in the foreseeable future and therefore does not need protection under the ESA.

“This is truly a historic effort – one that represents extraordinary collaboration across the American West,” said Secretary Jewell. “It demonstrates that the Endangered Species Act is an effective and flexible tool and a critical catalyst for conservation – ensuring that future generations can enjoy the diversity of wildlife that we do today. The epic conservation effort will benefit westerners and hundreds of species that call this iconic landscape home, while giving states, businesses and communities the certainty they need to plan for sustainable economic development.”

“Today’s decision reflects the joint efforts by countless ranchers and partners who have worked so hard to conserve wildlife habitat and preserve the Western way of life,” said U.S. Agriculture Secretary Tom Vilsack. “Together, we have shown that voluntary efforts joining the resources of private landowners, federal and state agencies, and partner organizations can help drive landscape-level conservation that is good for sage-grouse, ranching operations, and rural communities. Through the comprehensive initiatives on both public and private lands, the partnership has made and will continue to make monumental strides in supporting the people and wildlife that depend on the sagebrush landscape.”

The FWS’s September 30, 2015 deadline to review the status of the species spurred numerous federal agencies, the 11 states in the range, and dozens of public and private partners to undertake an extraordinary campaign to protect, restore and enhance important sage grouse habitat to preclude the need to list the species. This effort featured: new management direction for BLM and Forest Service land use plans that place greater emphasis on conserving sage grouse habitat; development of state sage grouse management plans; voluntary, multi-partner private lands effort to protect millions of acres of habitat on ranches and rangelands across the West; unprecedented collaboration with federal, state and private sector scientists; and a comprehensive strategy to fight rangeland fires.

“We’ve written an important chapter in sage grouse conservation, but the story is far from over,” said Director Ashe. “By building on the partnerships we’ve forged and continuing conservation efforts under the federal and state plans, we will reap dividends for sage grouse, big game and other wildlife while protecting a way of life in the West. That commitment will ensure that our children and grandchildren will inherit the many benefits that this rich but imperiled landscape has to offer.”

The BLM and USFS today announced that they have issued Records of Decisions finalizing the 98 land use plans that will help conserve greater sage-grouse habitat and support sustainable economic development on portions of public lands in 10 states across the West. The land use plans were developed during over a multi-year process in partnership with the states and local partners, guided by the best available science and technical advice from the FWS. The BLM and USFS also initiated today the public comment process associated with their proposal to withdraw a subset of lands that are sage grouse strongholds from future mining claims. More information on the plans is available here . More information on the proposed mineral withdrawal is available here.

The future of the sage grouse depends on the successful implementation of the federal and state management plans and the actions of private landowners, as well as a continuing focus on reducing invasive grasses and controlling rangeland fire. The FWS has committed to monitoring all of the continuing efforts and population trends, as well as to reevaluating the status of the species in five years.

The greater sage-grouse is an umbrella species, emblematic of the health of sagebrush habitat it shares with more than 350 other kinds of wildlife, including world-class populations of mule deer, elk, pronghorn, and golden eagles. In 2010, the Service determined that the greater sage-grouse warranted ESA protection because of population declines caused by loss and fragmentation of its sagebrush habitat, coupled with a lack of regulatory mechanisms to control habitat loss. However, the need to address higher-priority listing actions precluded the Service from taking action to list the bird. Since that time, actions from state, federal and private partners have added needed protections, increasing certainty that this important habitat will be protected.

Roughly half of the sage grouse’s habitat is on federal lands, most of it managed by the BLM and USFS. These tend to be drier uplands where the birds mate, nest and spend fall and winter. While the federal plans differ in specifics to reflect local landscapes, threats and conservation approaches, their overall goal is to prevent further degradation of the best remaining sage grouse habitat, minimize disturbance where possible and mitigate unavoidable impacts by protecting and improving similar habitat.

About 45 percent of the grouse’s habitat is on state and private lands, which often include the wetter meadows and riparian habitat that are essential for young chicks. Efforts by private landowners in undertaking voluntary sage grouse conservation have been an important element in the campaign. While private lands programs differ, each works with ranchers, landowners and other partners on long-term agreements to undertake proactive conservation measures that benefit sage grouse.

Through the NRCS-led Sage Grouse Initiative, more than 1,100 ranchers have restored or conserved approximately 4.4 million acres of key habitat. Through the recently-announced SGI 2.0 strategy, USDA expects voluntary, private land conservation efforts to reach 8 million acres by 2018. On private and federal lands, the FWS and BLM have received commitments on 5.5 million acres through Candidate Conservation Agreements. Many of these projects also improve grazing and water supplies for ranchers, benefitting cattle herds and the long-term future of ranching in the West.

States in the sage grouse’s range have been engaged in this collaborative process. For example, Wyoming has been implementing its “core area” strategy for over five years. Montana has committed to implement a similar plan that would set standards for managing private and state lands to meet sage grouse conservation goals. Similarly, Oregon has adopted an “all lands” strategy for greater sage-grouse conservation. Colorado, Utah, Nevada, and Idaho have also developed strategies to improve state and private land management to benefit the sage grouse.

Greater sage-grouse once occupied more than 290 million acres of sagebrush in the West. Early European settlers reported seeing millions of birds take to the skies. But the bird, known for its flamboyant mating ritual, has lost almost half of its habitat since then.

Despite losses, sage grouse populations are still relatively large and well-distributed across the range. The FWS anticipates that some sage grouse populations may continue to decline in parts of the range, as conservation efforts begin to take effect. Other populations appear to be rebounding as they enter a rising period in their decadal population cycle, which can fluctuate by as much 30 to 40 percent. The FWS has found conservation measures will slow and then stabilize the loss of habitat across the range, securing the species success into the future.

For more information about the greater sage-grouse and this decision, including reports, maps, myths and facts and Secretary’s Jewell’s video announcing the USFWS decision, please see www.doi.gov/sagegrouse.